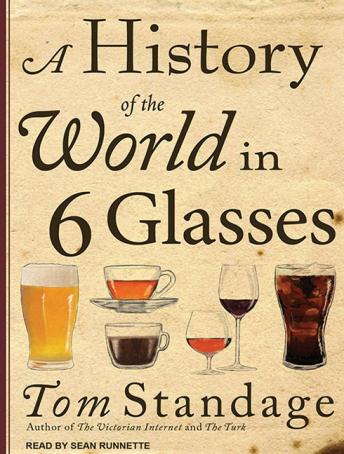 A History of the World in 6 Glasses

Throughout human history, certain drinks have done much more than just quench thirst. As Tom Standage relates with authority and charm, six of them have had a surprisingly pervasive influence on the course of history, becoming the defining drink during a pivotal historical period.

A History of the World in 6 Glasses tells the story of humanity from the Stone Age to the twenty-first century through the lens of beer, wine, spirits, coffee, tea, and cola. Beer was first made in the Fertile Crescent and by 3000 B.C.E. was so important to Mesopotamia and Egypt that it was used to pay wages. In ancient Greece, wine became the main export of her vast seaborne trade, helping spread Greek culture abroad. Spirits such as brandy and rum fueled the Age of Exploration, fortifying seamen on long voyages and oiling the pernicious slave trade. Although coffee originated in the Arab world, it stoked revolutionary thought in Europe during the Age of Reason, when coffeehouses became centers of intellectual exchange. And hundreds of years after the Chinese began drinking tea, it became especially popular in Britain, with far-reaching effects on British foreign policy. Finally, though carbonated drinks were invented in 18th-century Europe, they became a 20th-century phenomenon, and Coca-Cola in particular is the leading symbol of globalization.

For Tom Standage, each drink is a different kind of technology, a catalyst for advancing culture by which he demonstrates the intricate interplay of different civilizations. You may never look at your favorite beverage the same way again.

I love drinking all these things! I loved the concept and perspective in this book. I never considered the influence beverages had on social development and commerce. I thoroughly enjoyed this.

Overall the book provided an enjoyable listen and I don't regret picking it up. However if you are interested in the social aspect of how people lived in the past you might not learn anything new. The book provides more of a broad-ish overview than a in depth guide. It told me about things I was mostly already aware of (particularly in the first half of the book) however it is nice to hear them in a different context and with slightly different point of view. I will be buying this book for my bookshelf. I didn't however enjoy the narrator. His reading was quiet flat and it didn't seem that he was interested in the topic. Would recommend to a friend.

An enjoyable in depth study of beverages which are ever-present and in some ways indispensable to us in our day to day lives. The author allows us to see the connections between these familiar drinks to human history and pre-history in a remarkably entertaining and enlightening way. Many of the details of coffee and tea's early days in western civilization are truly fascinating, as are the details of the carbonated drinks of the late 19th and early 20th century America. The narrator's voice is authoritative but pleasant and keeps our interest.

A most enjoyable and informative read. I never knew how intertwined all these drinks were with our social, political and economic life. The title is most apt and covers each drink in great detail. I am much the wiser for reading this book.

It explains the historical background of each of the different drink segments extremely well.

This is one of those books that falls outside of my unworldly personality requirements. To begin with, the story line, along with the narration, just couldn't capture my attention - The content seemed a bit thin and far reaching at the same time. And then, when the author decided to remind the reader of the millions of years of evolution and mankind's split from apes, (with no mention of the apes contribution to alcohol mind you) my brain ground to a halt. Many other people, however, enjoyed this book - so, please, take what I'm saying with the grain.

I made it through the first CD and then gave up. There really wasn't enough information for a book - it should have been a long magazine article (like in Smithsonian). The author kept repeating things as if there were a minimum number of words needed on each topic.

This title is due for release on March 25, 2011
We'll send you an email as soon as it is available!