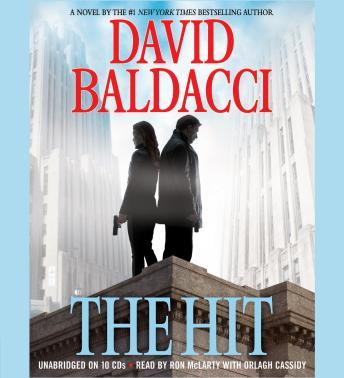 #2 of Will Robie series

Master assassin Will Robie must track down a deadly rogue agent, but the attacks conceal a larger threat that could send shockwaves through the U. S. government and around the world in this #1 New York Times bestselling thriller.

Will Robie is a master of killing.

A highly skilled assassin, Robie is the man the U.S. government calls on to eliminate the worst of the worst--enemies of the state, monsters committed to harming untold numbers of innocent victims.

No one else can match Robie's talents as a hitman...no one, except Jessica Reel. A fellow assassin, equally professional and dangerous, Reel is every bit as lethal as Robie. And now, she's gone rogue, turning her gun sights on other members of their agency.

To stop one of their own, the government looks again to Will Robie. His mission: bring in Reel, dead or alive. Only a killer can catch another killer, they tell him.

But as Robie pursues Reel, he quickly finds that there is more to her betrayal than meets the eye. Her attacks on the agency conceal a larger threat, a threat that could send shockwaves through the U.S. government and around the world.

I’ve read several Baldacci novels and have enjoyed them all until now. If I had to use one word to describe this piece of work that word would be tedious.

Can't go wrong with David Baldacci and Ron McLarty. This is definitely a man's man book. May not be right for the soft or female.

This was a fantastic book. It kept you guessing and loved the surprise elements!! Didn’t want it to end.

Baldacci is awful at dialog between characters. At times it makes the book hard to listen to.

A very good read that keeps your interest all through the book. Narrators were also very good.

A perfect blend of a great writer and an excellent narrator.Always a home run with these two. William A. Sizemore

Nice sequel. Packed with action and intricate details of the plot. I enjoyed it, and I’m looking forward to part 3. It was a good production with a decent narrator, coupled with sound effects.

Great book. However I listened to it right after the first Will Robie book, The Innocent, which I liked a lot more. It just didn’t stand up to The Innocent for me. But overall, a great listen and I love this narrator and all the sound effects and different voices in this series.

Never been really into the action books but this series has got me hooked!!! I am going through a book in less than a week… I look forward to reading more.

Little slower pace than what I was join for. Still not a bad read. Would recommend. Narrator was great

Loved it! Baldacci is becoming one of my favorites.

David Baldacci has me hooked on the Will Robie series, very well written and keeping the characters going tthroughout books makes it more of an experience. Ron McLarty and Orlagh Cassidy do a great job with the characters voices and keep you engaged in the story from start to finish.

I wish I had read his books in order. Listened to a couple others that he wrote later so thwe s was like a prequel. It explained a lot though. Wasn’t that into the southern accent this female character had since it does not seem that way in later books.

Nice ride with some surprising twist

Enjoyed all the David Baldacci series. Ron McLarty is the best narrator so far.

It's an experience to listen to any of the David Baldacci books. The story-telling is great, the storylines are captivating, and we enjoyed the male and female narrators. Ron and Orlaugh do great jobs. We are huge fans and listen to them on our trips and local drives, sometimes going out of our way to listen a little longer. We just started the next in the series and we are never disappointed.

I enjoy the male/female narration. Often times when a book is narrated by just one person, it's awkward when they speak dialogue for the opposite sex. Ron and Orlaugh do an amazing job and heightens the enjoyment of the storytelling

I love this series! I did The Innocent first and realized this was the most recent of a four book series and went back to the beginning. I really love the way he develops the characters and yet each book stands on its own! I've been a huge fan ever since Absolute Power!

I've listened to a couple of his books on tape so far and love all of them! The narration definitely plays a huge part in a good book on tape as well! Love both the author and narrator!

It's a great listen!! Lots of action, and easy to follow the story!!

Excellently written and read. This is not just an audio book, it's an experience... an experience to be in the throes of a firefight or holding your breath during a life or death escape. The process of unveiling and developing characters was nothing less than genius!!! Oh and the reading... Superb is an understatement!!! Loved the sound effects and music. Editors must be commended as well. Great producing of and outstanding and memorable audio experience.

This title is due for release on April 23, 2013
We'll send you an email as soon as it is available!