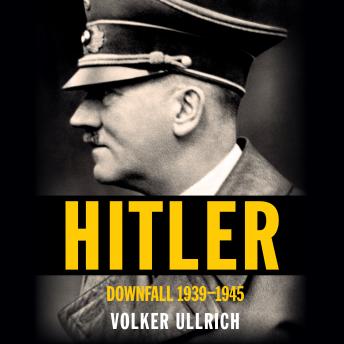 From the author of Hitler: Ascent, 1889-1939-a riveting account of the dictator's final years, when he got the war he wanted but his leadership led to catastrophe for his nation, the world, and himself.

In the summer of 1939 Hitler was at the zenith of his power. The Nazis had consolidated political control in Germany and a series of foreign-policy coups had restored Germany to the status of a major world power. He now embarked on realizing his lifelong ambition: to provide the German people with the resources they needed to flourish and to exterminate those who stood in the way. Yet despite a series of stunning initial triumphs, Hitler's decision to invade the Soviet Union in 1941 turned the tide for good.

Now, Volker Ullrich offers fascinating new insight into Hitler's character and personality, vividly portraying the insecurity, obsession with minutiae, and narcissistic penchant for gambling that led Hitler to overrule his subordinates and then blame them for his failures; and, ultimately, when he realized the war was not winnable, to embark on the annihilation of Germany itself in order to punish the people who he believed had failed to hand him victory. This is a masterful account of a spectacular downfall, and an essential addition to our understanding of Hitler and the Second World War.

I would have loved to hear the story , but the narrator obviously wears dentures and it’s way to painful to listen. I don’t think they fit right.

Amazing outstanding and incredible. I've listened to this book about 20 times.