Hitler's Last Days: The Death of the Nazi Regime and the World's Most Notorious Dictator 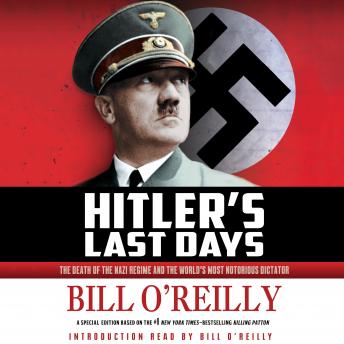 By early 1945, the destruction of the German Nazi State seems certain. The Allied forces, led by American generals George S. Patton and Dwight D. Eisenhower, are gaining control of Europe, leaving German leaders scrambling. Facing defeat, Adolf Hitler flees to a secret bunker with his new wife, Eva Braun, and his beloved dog, Blondi. It is there that all three would meet their end, thus ending the Third Reich and one of the darkest chapters of history.

Hitler's Last Days is a gripping account of the death of one of the most reviled villains of the 20th century-a man whose regime of murder and terror haunts the world even today. Adapted from Bill O'Reilly's historical thrillerKilling Patton, this book will have young readers-and grown-ups too-hooked.

This thoroughly-researched and documented book can be worked into multiple aspects of the common core curriculum.

Hitler's Last Days: The Death of the Nazi Regime and the World's Most Notorious Dictator

This title is due for release on June 9, 2015
We'll send you an email as soon as it is available!