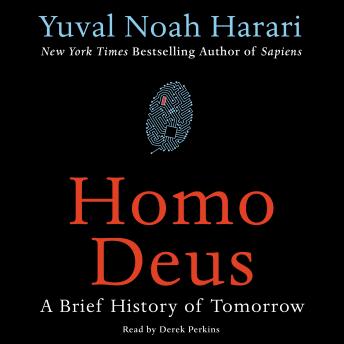 Yuval Noah Harari, author of the critically-acclaimed New York Times bestseller and international phenomenon Sapiens, returns with an equally original, compelling, and provocative book, turning his focus toward humanity’s future, and our quest to upgrade humans into gods.

Over the past century humankind has managed to do the impossible and rein in famine, plague, and war. This may seem hard to accept, but, as Harari explains in his trademark style—thorough, yet riveting—famine, plague and war have been transformed from incomprehensible and uncontrollable forces of nature into manageable challenges. For the first time ever, more people die from eating too much than from eating too little; more people die from old age than from infectious diseases; and more people commit suicide than are killed by soldiers, terrorists and criminals put together. The average American is a thousand times more likely to die from binging at McDonalds than from being blown up by Al Qaeda.

What then will replace famine, plague, and war at the top of the human agenda? As the self-made gods of planet earth, what destinies will we set ourselves, and which quests will we undertake? Homo Deus explores the projects, dreams and nightmares that will shape the twenty-first century—from overcoming death to creating artificial life. It asks the fundamental questions: Where do we go from here? And how will we protect this fragile world from our own destructive powers? This is the next stage of evolution. This is Homo Deus.

With the same insight and clarity that made Sapiens an international hit and a New York Times bestseller, Harari maps out our future.

Brilliant and inspiring in that it really makes you think, fantastic narrator.

Wow, this book is mind blowing!

Excellent, narrator was clear and sissect in his history and flow. Noah did a good job of expressing his opinions with facts. Did not always agreed, but his content was always interesting. Michael Urbano

This is a very important book if you can get out of your own way and discard all your misconceptions and bias at the proverbial door. Do you think you know what liberal is based on our narrow nonsensical politics in America? You don't. Are you afraid of the latest boogeyman we have made of myth of - the Islamic Terrorist? They are completely irrelevant. I dont agree with 100% of what is proposed in this book- but it's ability to look objectively at our world and our species beyond the fictions we are spoonfed daily, listen to/read this book. Bonus: isn't some radical conspiracy about demonic worship or adrenaline harvesting- those fictions are a symptom of the fact that we are being provided with a wildly false narrative about our world- and this book does an admirable job of pulling back the curtain and showing who we actually are, where we actually came from, and where we are actually going.

Oversimplified and too pushy in his ideas

I listened to this after Sapiens, and will say that it's not quite as good. There are a lot of interesting facts to support the author's theories about where we're going, and why. But it feels like its missing the subtle humor and story cohesion that Sapiens had. Still a really good book in its own right, but not quite at the same level as Sapiens.

I expected much more after readings excelent first book Sapience where this book carried much of repetition.

I really enjoyed this book as well as the narrator. A must listen especially if you have listened to Sapiens

such a great listen I have always thought along these lines but never actually heard someone have the courage to speak it.

The book was great, but the narration doesn't follow the book exactly at times. For example a couple of paragraphs were left out, some different words were used, and sentences were skipped. It is overall very similar I just thought this was strange

This is a good read and the narration is excellent. I also enjoyed his other books. I like how he brings the reader from the past into the future. I found the book to be provocative and thoughtful making one pause to consider his arguments . I enjoyed it very much.

Excellent book and narration! It picks up where Sapiens left off almost as if they're 2 halves of the same great book. I learned so much, I intend to have a 2nd and even 3rd listen soon.

Very well researched, written and conveyed by the narrator.

This title is due for release on February 21, 2017
We'll send you an email as soon as it is available!