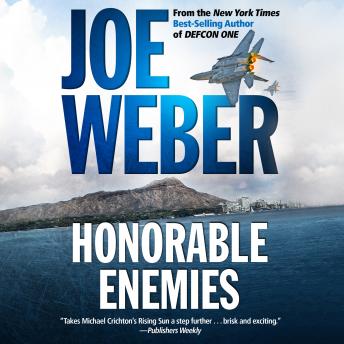 The beautiful tranquility of the Hawaiian afternoon is shattered when a cruise ship filled with Japanese tourists is comes under fire. Unbelievably, a civilian helicopter is strafing the ship with automatic weapons.

The shock waves from the tragic attack reach all the way to Washington and Tokyo. In retaliation for the attack, a group of American tourists is ambushed in Osaka, and then Japanese-Americans become targets across the United States. Relations between the U.S. and Japan rapidly deteriorate.

The only way to restore order and prevent a greater conflict is to find out who is responsible for the initial attack—and why. This task is assigned to senior CIA operations officer Stephen Wickham and a Japanese-American FBI agent, Susan Nakamura. Their search leads them to a deadly conspiracy of enormous proportions . . . and reaching all the way to the highest levels of the U.S. and Japanese governments.

In Honorable Enemies, Joe Weber has formulated a chilling post-Cold War scenario, once again proving himself a master at portraying a frighteningly real near-future confrontation with our most powerful rival—Japan.

'Some writers get better with age: Weber is among them.'—Library Journal