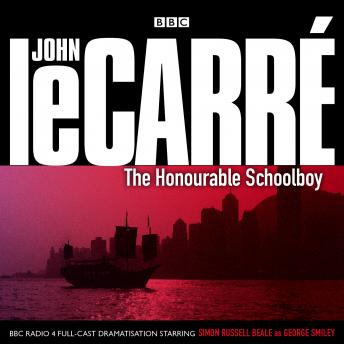 George Smiley is one of the most brilliantly realised characters in British fiction. Bespectacled, tubby, eternally middle-aged and deceptively ordinary, he has a mind like a steel trap and is said to possess ‘the cunning of Satan and the conscience of a virgin’. Smiley, now head of the Circus, must rebuild trust in the shattered organisation. He is also determined to destroy his nemesis, Karla, and his spy networks. He recruits Jerry Westerby, occasional spy, occasional news reporter, full-time romantic - the Honourable Schoolboy of the title - and despatches him to the Far East, where, amidst the corruption and decay of former colonies, a new battle is about to begin... Starring the award-winning Simon Russell Beale as Smiley, and with a star cast including Hugh Bonneville, Maggie Steed and Anna Chancellor, this gripping dramatisation perfectly captures the atmosphere of le Carré’s intricate, intriguing novel, the second in the Karla trilogy.

This title is due for release on February 11, 2010
We'll send you an email as soon as it is available!