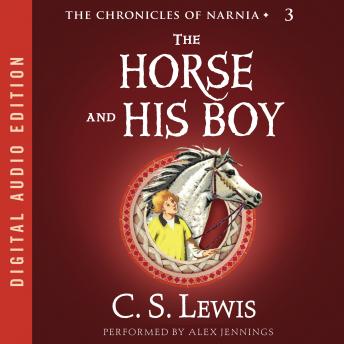 The Horse and His Boy

#3 of Chronicles of Narnia

The unabridged audio edition of The Horse and His Boy, book three in the classic fantasy series, The Chronicles of Narnia, narrated by renowned actor Alex Jennings.


On a desperate journey, two runaways meet and join forces. Though they are only looking to escape their harsh and narrow lives, they soon find themselves at the center of a terrible battle. It is a battle that will decide their fate and the fate of Narnia itself.

The Horse and His Boy is the third book in C.S. Lewis’s The Chronicles of Narnia a series that has become part of the canon of classic literature, drawing readers of all ages into a magical land with unforgettable characters for over fifty years. This is a novel that stands on its own, but if you would like to return to Narnia, read Prince Caspian, the fourth book in The Chronicles of Narnia.

I didnt like this book as much as the first two books in the Chronicles of Narnia. It just didnt have the same sense of adventure. Narnia is no longer a magic land that children stumble into but a country that anyone can travel to.

Good story! Well read! On to the next!

It was so great in the book to!！

I love this story. It may be my favorite of all the Narnia books. I was unsure how I'd like this version because we have the FOTF Radio Theater versions, which are all fantastic. But this really turned out to be a wonderful listen. I thought the narrator did a really great job, making it easy to follow the story and who was speaking when. I'll certainly look for more Alex Jennings narrations in the future. And this audiobook will be added to my regular go-to list.

Sooo good! I love to follow along in my hard copy, but also love to just listen along while my kids play, or when I'm baking. Such a wonderful narrator, too. So many good voices

Beautiful story, full of myth and magic. Symbolism too, of course, and it's all fun and fabulous. The narration is top notch; amazing how the different characters get so many different voices. Well done!

Loved it. Alex Jennings does a great job of narrating it.

I truly enjoyed this book as well as the others. It is truly an adventure. Very well written by an amazing author C. S. Lewis who had a very good spiritual insight. Enjoyed the narrator, very well read!

C.S. Lewis has always been one of my favorite authors. The Horse and his Boy is one very well written books. I loved the reader and thought that the CD's themselves would be worn and scratched but they played remarkably well. Thank you Simply Audiobooks for making sure your rentals are in good shape for us to listen too.

Sometimes it is nice to just change gears from the usual murder/mystery/thriller and go with a book like this. Even flowing story with adolescent curiousity makes for a fun book.

Very well read audiobook, I especially liked the voice range on all of the characters! highly recommend

This title is due for release on May 24, 2005
We'll send you an email as soon as it is available!