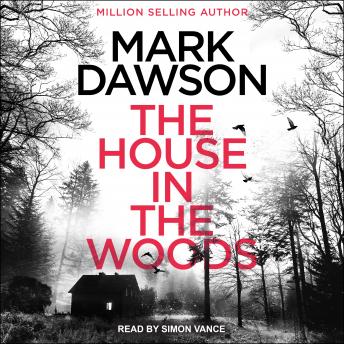 The House in the Woods

On Christmas Eve, DCI Mackenzie Jones is called to a shooting at a remote farmhouse. Ralph Mallender believes his father lies dead inside. When three more bodies are discovered, it's clear a festive family gathering has turned into a gruesome tragedy.

At first it seems like an open and shut case: a murder suicide committed by Ralph's volatile brother Cameron. Then new evidence makes Mack suspect the man who reported the crime is in fact the perpetrator.

But Mack isn't the only one with a stake in the case. Private investigator Atticus Priest has been hired to get Ralph acquitted. That means unearthing any weaknesses in Mack's evidence.

Irascible, impatient, and unpredictable, Atticus has weaknesses of his own. Mack knows all about them because they share a past-both professionally and personally. This time round, however, they aren't on the same side. And as Atticus picks at the loose ends of the case, everything starts to unravel in a way neither of them could ever have predicted . . .

Top notch crime fiction.. Atticus is the perfect oddball-intelligence-detective and I can’t wait for the next instalment! Narrator just as good as the content, match made in heaven m.

I picked this from the book club offerings . I love crime novels, was not what I expected, not really the style of writing I'm looking for, I did listen to it after all other books . Interesting content, a bit drawn out, nice plot twist.

I liked this one so much that I found another one of his to read. Very good.

I was offered this book from the book club. Considering that it is about a police department in Great Britain, I naturally expected an A. C, Doyle, or A. Christie flavor to the text. I was pleasantly surprised to find the book quite engaging! On more than a couple of occasions, I was on the proverbial edge of my seat! I had to write a review because I was caught up in the novel. An engaging read! I highly recommend!

Excellent book and excellent narration. I thought I had predicted the end correctly but there is a nice little twist in end that I definitely didn’t see coming. It gets straight into the story without heaps of background building up front. I like how Mark Dawson writes, he really draws you in.

I loved this book. I couldn’t wait to hear what happened next. I’m a fan.

Very enjoyable book. The story was engaging even though it was predictable. The narrator was accomplished and entertaining. I would listen to a sequel.

Enjoyed the book and the narrator. Had some interesting twists that kept me connected.

Well done although a bit of a take on Sherlock Hones character- I can see Benedict Cumberbatch as Priest . Looking for to the 2nd in the series

I loved this. The reveal was pure Agatha Christie style. Loved it. The end was even better. Instantly bought no 2.

Damn good book. I'm really invested in Atticus and his flawed genius personality. The narrator was very well versed in portraying each character and there was the right amount of twists and turns for it to be considered somewhat believable.

Compelling to the end, beautifully narrated.

Narrarator is fantastic! Voices changes between characters and very appropriate modulation and inflections show he is a pro. Atticus has me hooked! The writer knows how to captivate your attention and make my daily walks go by so quickly since I listen to this audio series. Look forward to more adventures!

Great book, great narration, didnt know who it was till the end! I did find myself zoning out a bit when the book shifted to macs perspective but its a great read.

Easy listen with lots of plot twists. Really enjoyed the characters as the unfolded and came alive!!

Quite enjoyable, narration was good the plot stayed simple easy to follow then the twist right at the end completed the story.

Loved this book, love the main character, a mix of tortured soul and Sherlock Holmes

Mark Dawson has written a true whodunit a couple of nice twists and turns. Kept me entertained throughout and I will certainly read more of his work. Simon, The narrator, was extremely easy and pleasant to listen to. No cringy mispronouncing or awkward accents. Thank you so much

It was pretty good, kept my interest.

Could not get into it

Really enjoyed the story and the narrator. Just added the next Atticus Priest book to my wish list.

First time for me listening for author Mark Dawson. we were on a long car trip and it helped pass the time. It was a cliff hanger until right at the end and did not figure it out. Simon Vance did an excellent job as narrator and I immediately recognized his voice from Camilla Lackberg books.

An interesting book, without every really getting me hooked.

It was a fun, classic murder mystery to listen to. I can't believe that I guess one of the culprits in the first chapter but it was still interesting to read. And I enjoyed the narrator.

Did not like the narration but story held my interest!

I thought the story was well written with enough intriguing turns that made it impossible to guess who done it. I look forward to hearing the next book

Kept my attention but there is nothing “riveting” about this book. Good start but the beginning is the most exciting. Good narration. Unexpected twist at the end

If Bill Nighy were 30 years younger (no offence, Bill), he would be the perfect actor to play the role of Atticus Priest. This is the first in a series, and the first novel I've read by Mark Dawson. I checked the Brooklyn Public Library for the thriller series written by Mr. Dawson, but didn't find it. Drat! The romantic tension between Atticus and DCI MacKenzie Jones adds to the appeal of the two characters; there's an interesting dog and a nice neighbor. We already know that there's something from the past that Atticus is in danger of obsessing over, still, I thought the ending was a bit unnecessary, since I enjoyed two characters apparently rooted in reality. That's why I gave the book "only" four stars, and I'm looking forward eagerly to the next installation in what should be a winning series. I also enjoyed the intricacies of the plot - it was impossible to guess whodunnit until all was revealed in the thundering denouement. Of course, any book narrated by Simon Vance is already running ahead of the pack. And no, Atticus doesn't remind me at all of Cormorant Strike! For one thing, I see him as thin, and he has two legs.

The detective reminds me of Cormorant Strike.

I found this book really boring. Didn’t even finish

The ending was very unpredictable and I enjoyed it very much. I liked it so much I am listening Atticus #2. Atticus Priest is my next hero.

Love the name Atticus Loved the pace of the story! Good mystery ! I’m already on the2nd of the series. Bonus: setting is in England!

Thoroughly enjoyed listening to this book. Was gripped the whole way through

good "unputdownable" kind of read ... interesting yet simple character development ... just enough back stories to get a sense of things ... you don't really see the end coming ...I mean you do ... but is never exactly how you think ... like the Atticus name and character. if you are a fan of police procedurals and court dramas this one is for you ...

I picked the title randomly with no preconceptions. I was caught up from the start. The story developed on many levels and story threads. Matched with this the narrator used his skills to evoke the emotions and subtleties of the story. So good, I downloaded the sequel.

Such a great book, hope there are more in this series, need to see who is stalking Atticus

GREAT STORY! i WAS HOPING TO GET ANOTHER BOOK. i FIND NOW i HAVE TO WAIT :(