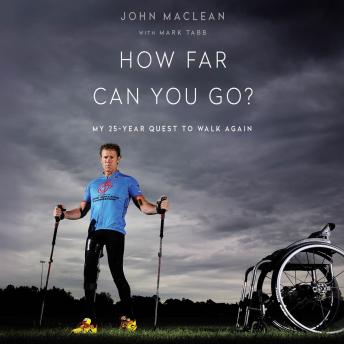 How Far Can You Go?: My 25-Year Quest to Walk Again

An inspirational memoir by a man who became an elite wheelchair athlete after suffering a catastrophic spinal injury and who finally walked again 25 years after his accident.

After two years of intense physical therapy following his crippling accident, John Maclean set a new course for himself when his father encouraged him to embrace his new reality and asked: 'How far can you go?' Inspired, Maclean became the first paraplegic to complete the Ironman World Championship and swim the English Channel before going on to win a silver medal for rowing at the 2008 Paralympic Games--yet these achievements did not come easy or on his first try. But with fierce tenacity, determination, and the love of family and friends Maclean was able to see each dream realized.

Yet he longed for one more victory: to walk on the beach with his family, holding his wife's hand. Through a radical therapy, he retrained his mind and challenged conventional thinking to walk again after 25 years in a wheelchair. HOW FAR CAN YOU GO?is his amazing story.