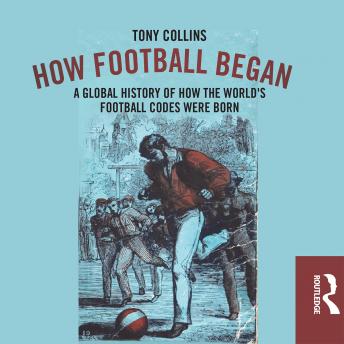 How Football Began: A Global History of How the World's Football Codes Were Born

'This ambitious and fascinating history considers why, in the space of sixty years between 1850 and 1910, football grew from a marginal and unorganised activity to become the dominant winter entertainment for millions of people around the world.

The book explores how the world's football codes - soccer, rugby league, rugby union, American, Australian, Canadian and Gaelic - developed as part of the commercialised leisure industry in the nineteenth century. Football, however and wherever it was played, was a product of the second industrial revolution, the rise of the mass media, and the spirit of the age of the masses.

Important reading for students of sports studies, history, sociology, development and management, this book is also a valuable resource for scholars and academics involved in the study of football in all its forms, as well as an engrossing read for anyone interested in the early history of football.'

How Football Began: A Global History of How the World's Football Codes Were Born

This title is due for release on January 30, 2020
We'll send you an email as soon as it is available!