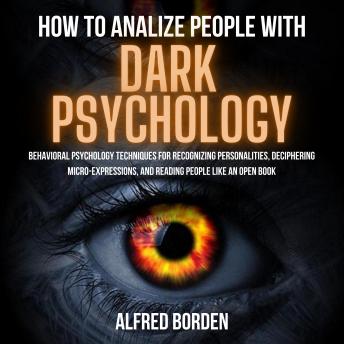 HOW TO ANALYZE PEOPLE WITH DARK PSYCHOLOGY: Behavioral Psychology Techniques For Recognizing Personalities, Deciphering Micro-Expressions, And Reading People Like An Open Book

While Psychology is the study of human behavior and is central to our thoughts, actions, and interactions, the term Dark Psychology is the phenomenon by which people use tactics of motivation, persuasion, manipulation and coercion to get what they want.

Dark psychology is the science and art of mind control and manipulation. If psychology refers to the study of the behavior of humans and focuses on actions, interactions, and thoughts, dark psychology is a phenomenon where people use tactics of coercion, manipulation, persuasion, and motivation just to get the things they want.

There is such a thing known as “The Dark Triad” that pertains to what psychologists and criminologists identify as the easy way of predicting not only criminal behavior but also broken and problematic relationships.

The traits included in the Dark Triad are the following:


- Machiavellianism - The use of manipulation to exploit and deceive people with no sense of morality.
- Narcissism – It involves lack of empathy, grandiosity, and egotism.
- Psychopathy – Usually friendly and charming but is characterized by remorselessness, lack of empathy, impulsivity, and selfishness.

No one wants to be manipulated but the sad news is that it can happen pretty often. You might not be the subject to a person who belongs to Dark Triad. However, average people encounter tactics of dark psychology every single day.

These strategies can often be seen in online ads, commercials, sales methods, and even the behaviors of superiors at work. Parents of kids, specifically teens, will most definitely experience such tactics as their children start experimenting with behaviors to seek autonomy and get the things they want. The truth is that dark persuasion and covert manipulation are typically used by those people that you love and trust.

The title and narrator of the book is fine. The contents are the problem. If you have absolutely no social skills this book is for you. I was looking for something more in depth than staring to long at someone is a no no.

I was skeptical because the title seemed edgy. The good reviews made me give it a shot. This time, I should have judged a book by its cover. Mind you, I have 6 gotten about an hour or so into the book, but so far, it just isn't very educational. A lot of the chapters are a couple of minutes long and a lot of info if regurgitated (not really reiterated) several times. The most frustrating part is how the author goes on tangents into medical knowledge about DNA, evolution, and how nabies communicate. Now, this sounds nice and relevant at first, but it really comes off as the author just sharing something interesting they learned without actually tying it into the actual subject matter of the book. In summary; If you are on the fence about this one, get off and walk the other way.