How To Marry a Millionaire Vampire 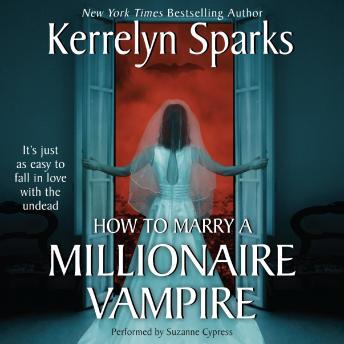 So what if he's a bit older and usually regards a human female as dinner, not a dinner date? Yes, Roman Draganesti is a vampire, but a vampire who lost one of his fangs sinking his teeth into something he shouldn't have. Now he has one night to find a dentist before his natural healing abilities close the wound, leaving him a lop'sided eater for all eternity.

Things aren't going well for Shanna Whelan either...After witnessing a gruesome murder by the Russian mafia, she's next on their hit list. And her career as a dentist appears to be on a downward spiral because she's afraid of blood. When Roman rescues her from an assassination attempt, she wonders if she's found the one man who can keep her alive. Though the attraction between them is immediate and hot, can Shanna conquer her fear of blood to fix Roman's fang? And if she does, what will prevent Roman from using his fangs on her...

How To Marry a Millionaire Vampire