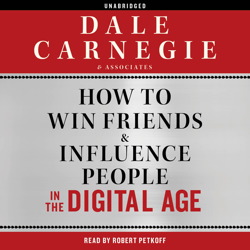 How to Win Friends and Influence People in the Digital Age

Celebrating the seventy-fifth anniversary of the original landmark bestseller How to Win Friends and Influence People, comes an up-to-the-minute adaptation of Carnegie’s timeless prescriptions for the digital age.

Dale Carnegie could never have predicted the trajectory that new media would take, and the ways that the simple television screen would be adapted into computers and handheld communication devices. He didn’t know the term “social media” and Facebook was something not even dreamed of in Buck Rogers cartoons. And yet his lessons remain relevant for everyone who communicates online today. In fact, with problems such as cyber bullying and email etiquette, we need Carnegie’s help more than ever. Dale Carnegie and Associates, Inc. has re-imagined Carnegie’s lasting lessons for this difficult digital age, reframing Carnegie’s insights about communication, self-expression, and leadership. This book is a must-have guide for anyone who wants to find success on Facebook, Linked-In, Twitter, and any social media format today and in the future.

I really enjoyed the book. It gave some insight on how work with my coworkers. I will go back and take notes. This book will change the way I approach people.

Wonderful book. Does not stray away from the teachings of Dale Carnagie

Recommend for all....I am 66 year-old accountant that has been in business and provided business consulting for over 40 years, and this was a joy...I am never too old to learn.

Fantastic with the melting in of the modern way

Filled with "common sense" ... that we need to reminded to do. :) This is a critical update to the book to help navigate the Twitterverse that we live in these days.