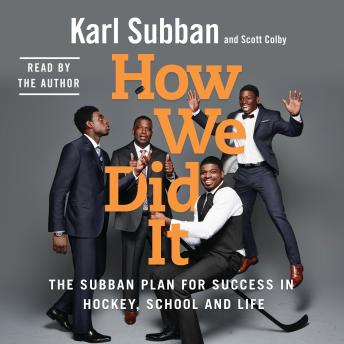 How We Did It: The Subban Plan for Success in Hockey, School and Life

The ultimate hockey dad, Karl Subban is a former school principal and father of five, including three sons--P.K., Malcolm and Jordan--who have been drafted to the NHL. Karl's inspirational and moving story follows the hockey journey from house league to the big leagues and shows how to grow the unlimited potential that is in every child.

In his thirty-plus years of coaching, teaching and parenting, Karl Subban has proved to be a leader with the gift of inspiring others. He has dedicated his life to helping young people grow their potential--to be better at what they do, and to be better people.
Originally from Jamaica, Karl Subban, along with his wife, Maria, have raised five accomplished children. Their oldest son is P.K. Subban, who won the Norris trophy for top defenceman in the NHL and whose trade from the Canadiens to the Nashville Predators shocked the hockey world. Their two daughters are teachers, one a university basketball star and the other a talented visual artist. Their two youngest sons, Malcolm and Jordan, have been drafted and signed by the Bruins and the Canucks.
As a child, Karl dreamed of being a star cricket player--but when he moved to Canada at age 12, hockey and basketball became his new passions. At university, when he realized his NBA hoop dreams would not come to be, Subban found his true destiny as an educator, devoting his life to bringing out the best in his students and his children.
From the backyard hockey rink to the nail-biting suspense of draft days, Karl Subban shares tales of his family's unique hockey journey. Mixing personal stories with lessons he learned as a coach and principal--lessons about goal-setting, perseverance and accomplishment--How We Did It will allow other parents, teachers, coaches and mentors to apply the same principles as they help the young people in their lives to identify, develop and live their dreams.

How We Did It: The Subban Plan for Success in Hockey, School and Life