The Hunters: A Presidential Agent Novel 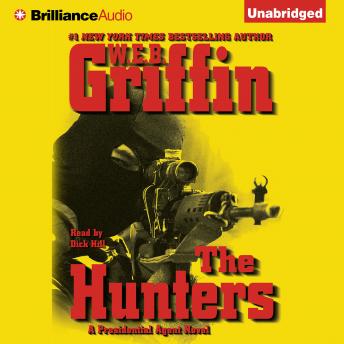 The first two novels in W. E. B. Griffin’s exciting new Presidential Agent series, By Order of the President and The Hostage, immediately raced up the bestseller lists. Told in “punchy prose that connects like a right hook” (Chicago Tribune), they were further proof that “Griffin just keeps on getting better” (Booklist).

The Hunters picks up right where The Hostage left off. Two brutal murders and millions of missing dollars in the growing UN/Iraq oil-for-food scandal have led Castillo and his team to an estancia in Uruguay, where the man they seek is murdered right before their eyes. Who is responsible? Most likely, the people higher up in the dirty-money chain - those willing to risk anything to keep their secrets from being revealed. They’ve left just enough of a trail, though, for Castillo to pick up the scent, and with carte blanche from the President of the United States to follow it wherever it takes him, he ends up…well, not exactly where he expected…

This title is due for release on January 2, 2007
We'll send you an email as soon as it is available!