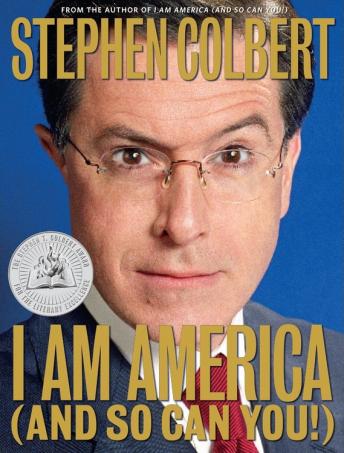 I Am America (And So Can You!)

Congratulations--just by looking at this webpage, you became 25% more patriotic.

From Stephen Colbert, the host of television's highest-rated punditry show The Colbert Report, comes the book to fill the other 23¬ø hours of your day. I Am America (And So Can You!) contains all of the opinions that Stephen doesn't have time to shoehorn into his nightly broadcast.

Dictated directly into a microcassette recorder over a three-day weekend, this book contains Stephen's most deeply held knee-jerk beliefs on The American Family, Race, Religion, Sex, Sports, and many more topics, conveniently arranged in chapter form.

Always controversial and outspoken, Stephen addresses why Hollywood is destroying America by inches, why evolution is a fraud, and why the elderly should be harnessed to millstones.

You may not agree with everything Stephen says, but at the very least, you'll understand that your differing opinion is wrong.

I Am America (And So Can You!) showcases Stephen Colbert at his most eloquent and impassioned. He is an unrelenting fighter for the soul of America, and in this book he fights the good fight for the traditional values that have served this country so well for so long.

Please buy this book before you leave the store

An easy, quick listen that made me chuckle quite a bit. The guest readers were a treat- Amy Sedaris, Jon Stewart, et al.

Hilarious. This guy is crazy. It seems to be a continuation of his show while he seems to be on crack.

This book was okay. I like Colbert's television show alot and wish I could recommend the book more. Just so so......

I enjoy watching The Cobert Report, but did not like this audio book. I believe Steve's humor is better taken in smaller doses....

If you love Stephen Colbert, you like this book. He was a little 'over the top' at times, but as long as you remember that he's a comedian and don't take him too seriously it's ok.

I found this book to be quite entertaining...a couple of sections where I could have done without the cursing, but otherwise, a great way to pass the time during my commute!

Stephen Colbert is funny and clever and ironic. His sarcasm is so good that some people think he's actually a conservative!

A half hour TV show can be funny, but hours of Colbert joking about how awesome he is was far too much. After listening to this audiobook, I don't enjoy the show nearly as much. Watch the show, pass up the book.

Classic Colbert provides plenty of chuckles and giggles as he hams it up on this audio book. You got to love the guy!

A great quick "read" with both light and intellectual humor, but nothing too deep. This is great for the ride after work to put your mind at ease and get a few laughs while no having to think too hard. WARNING: If you haven't watched at lease one episode of The Colbert Report or The Daily Show, do so first. This type of comedy is not for everyone. That said, it isn't all 3rd grade humor and offensive for the sake of being offensive. It is NOT South Park humor. :)

I liked Jon Stewart's America (the book) better. This one was not as funny and I couldn't keep my attention in it.

I'm a real fan of Colbert. And, nothing has tickled my funny bone as much as Jon Stewart's book. But this one is a miss. Obvious, predictable humor that doesn't go beyond his nightly show. I still love him, but I was expecting something a bit more creative, a bit more audacious, a bit...funnier.