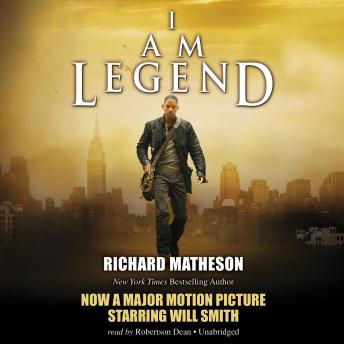 The basis for the film starring Academy Award nominee Will Smith, I Am Legend is a classic of horror and suspense.

In I Am Legend, a terrible plague has decimated the world, and those who were unfortunate enough to survive are transformed into bloodthirsty creatures of the night. Robert Neville is the last living man on earth. Every other man, woman, and child has become a vampire, and they are all hungry for Neville’s blood. By day, he is the hunter, stalking the sleeping undead through the abandoned ruins of civilization. By night, he barricades himself in his home and prays for the dawn. How long can one man survive in a world of vampires?

Richard Matheson’s chilling tale is a white-knuckle ride into a world of darkness and terror.

This would have made a far better movie what an amazing book.

I enjoyed this book a great deal. Very different from the movie. I think Neville's unpacking of his emotions and grief were at times exhausting, but lended new layers to his character and were necessary.

It was completely different from the movie and deeper. The narrator, however, lacked the range of voice in comparison with narrators like Frederick Davidson.

I felt the book was entertaining. It is far different from the movie in that the book portrays the infected as vampires. It really went into detail how one might react if placed in a situation where you are living out your days as the last of your kind while simultaneously trying not to get killed in the process. I would recommend this audio book to others, as long as you are not expecting to get more detailed version of the Will Smith movie. The narrator did a great job carrying the story along. All in all I give this audio book two thumbs up.

I couldn't stop listening to this book. Great book.

The book was much different from the movie. Can't decide if that is good or bad as it is comparing apples to oranges IMO. It is interesting but if you want a longer version of the movie then you may want to skip it as the plot varies greatly between the 2.

For those of us that can remember "The Twilight Zone" and "Outer Limits" this book would remind most of us of that kind of writing. The psychological aspect of the story played a big part. Is this the first appearance of Zombies in modern literature? They weren't called zombies in this book but they fit the description. And this may have been one of the first last man on earth stories. Several firsts. Well read.

One of the rare times that the movie was better than the book. Far better. The book turned out to be a second rate vampire story. The movie had more richness of plot and character. I decided to read the book hoping I would get even more of that. Very disappointed.

I did not care for the movie but I loved the book. It was a psychological map on how to deal with the fact that you are the last living man who survives a plague. I liked how it described the different stages of how the hero accepted his fate. The end was dark and grim, but very realistic, no fairy tale.

As is always the case the book is better than the movie and in this case better than all 3 of the movies based on the book.

I liked this book, I talk about this book. The book made the movie suck. People who read will always be upset at the movie version. I liked this book because it's about as close to understanding how you would internally deal with a Vampire outbreak.

Pretty good book. One of those you can relax, not think a whole lot and enjoy.

For being written in 1954, this book has aged well. Its the personal struggle of the last person left "alive" in a post-nuclear war Los Angeles. While probably not everyone's cup of tea - this is the beginning of the modern vampire and zombie books and films. I am Legend has been made into 3 different films - each true to different parts of the book.