I Will Not Beg 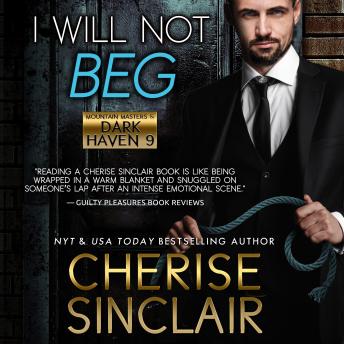 She signed away her freedom

Starved for affection, young Piper Delaney surrenders her life to a Master. But there is no love—only abuse. She’s told she can’t leave; she signed the slave contract. Years later, beaten and starving, she hears an English Dom say the contract’s illegal. Unenforceable. And she runs.

She reclaims her life and rises above the nightmare that was her past.

But her enslavement left scars. She longs for love, but the only men who truly attract her also terrify her--Dominants. Hoping to conquer her fears, she visits Dark Haven, but the sounds of the club are too much.

When a submissive panics, Sir Ethan steps in.

The powerful English Dom recognizes the shivering submissive in his lap. Years before, he’d corrected her Master’s deceit about a contract. She’s come a long way since then. Cynical at being pursued for his wealth, he finds Piper’s honesty compelling. She’s intelligent, brave…and she needs him. What Dom could resist?

His voice pulls her from panic attacks. His arms enclose her in safety. He treats her like a person, not something to mistreat. As he helps Piper overcome her fears, she starts to fall in love.

Then her past finds her and destroys…everything.

I Will Not Beg finally brings us the story of Sir Ethan and, boy, was it an emotional doozy. ~ Dirty Girl Romance

I Will Not Beg

This title is due for release on August 28, 2019
We'll send you an email as soon as it is available!