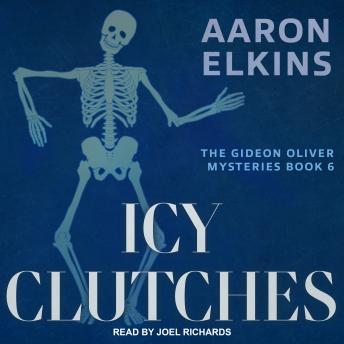 Edgar Award-winning series: On a trip to Glacier Bay, Alaska, the Skeleton Detective pursues a cold-hearted killer who buries evidence in an avalanche.

Gideon Oliver expects to be amicably bored when he takes on the role of 'accompanying spouse' at a lodge in the magnificent wild country of Glacier Bay, Alaska, where his forest ranger wife, Julie, is attending a conference. But it turns out to be exactly his cup of tea. There is another group at the lodge: six scientists on a memorial journey to the site of a thirty-year-old glacial avalanche that killed three of their colleagues. Their leader is TV's most popular science personality, the unctuous M. Audley Tremaine, who is the sole survivor of the fatal avalanche. But he does not survive long and is soon found hanged in his room. If that is not upsetting enough, shocked hikers discover human bones emerging from the foot of the glacier-are they the shattered remains of the three who died, finally seeing daylight after their two-mile, three-decade journey within the glacial flow?

When the FBI seeks expert help, everyone agrees how fortunate it is that Dr. Oliver, the famed Skeleton Detective, is on the scene. Everybody, that is, but the person who wants ancient history to stay that way-and who believes that murder is the surest way to keep the past buried.