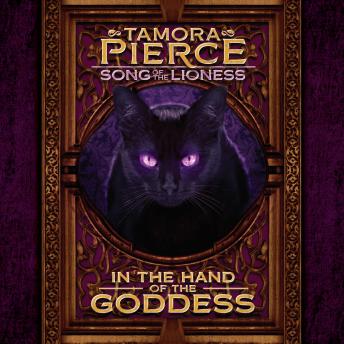 In the Hand of the Goddess: Song of the Lioness #2

#2 of Song of the Lioness

Disguised as a boy, Alanna of Trebond becomes a squire -- to none other than the prince of the realm. But Prince Jonathan is much more to Alanna; he is her ally, her best friend, and one of the few who knows that she's really a girl. Now it will take all of Alanna's awesome skill, strength, and growing magical powers to protect him from the mysterious evil sorcerer who is bent on his destruction--and hers!

Here continues the story of Alanna, a young woman bound for glory who is willing to fight against enormous odds for what she believes in.

I found this story to be lovely in so many ways. It builds well on what came before it while also preparing you for the adventures to come. Anyone should listen/read this book, BUT if you are a young woman or have a young woman in her life that needs a story of empowerment, I have no doubt that this series would be for them. People should chase their dreams no matter their sex, class, or station, and this story makes you believe that is can be done.

This title is due for release on November 27, 2001
We'll send you an email as soon as it is available!