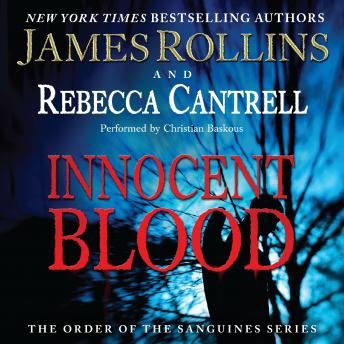 Innocent Blood: The Order of the Sanguines Series

In this riveting follow-up to The Blood Gospel, the first book in the thrilling and atmospheric Order of the Sanguine series, New York Times bestselling authors James Rollins and Rebecca Cantrell deliver a tale of international adventure, intrigue, suspense, and supernatural mystery involving a modern scientist, a highly secret eternal spiritual order, and a terrifying power who must join forces to bring down a ruthless and cunning enemy and prevent the Apocalypse.

While exploring a tomb hidden for centuries in the depths of Masada, Israel, brilliant archaeologist Erin Granger began an incredible journey to recover a miraculous ancient artifact tied to Christ himself. The quest introduced her to a diabolical enemy determined to discover the book and use its powers for his own dark ends. It also led her to an ancient and highly secret Vatican order—known simply as the Saguines. Though she survived, the danger has only just begun . . .

An attack outside Stanford University thrusts Erin back into the fold of the Sanguines. As the threat of Armageddon looms, she must unite with an ancient evil to halt the plans of a man determined to see the world end, a man known only as Iscariot.

Innocent Blood: The Order of the Sanguines Series