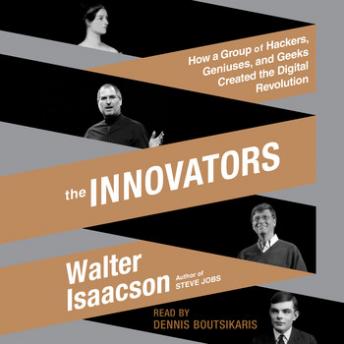 The Innovators: How a Group of Hackers, Geniuses, and Geeks Created the Digital Revolution

Following his blockbuster biography of Steve Jobs, Walter Isaacson’s New York Times bestselling and critically acclaimed The Innovators is a “riveting, propulsive, and at times deeply moving” (The Atlantic) story of the people who created the computer and the internet.

What were the talents that allowed certain inventors and entrepreneurs to turn their visionary ideas into disruptive realities? What led to their creative leaps? Why did some succeed and others fail?

This is the story of how their minds worked and what made them so inventive. It’s also a narrative of how their ability to collaborate and master the art of teamwork made them even more creative. For an era that seeks to foster innovation, creativity, and teamwork, The Innovators is “a sweeping and surprisingly tenderhearted history of the digital age” (The New York Times).

I enjoyed this book, the narration was excellent as well.

Absolutely love. The narrator is phenomenal. It is a lot of information to take in but I feel that I get more listening than I would reading the thick book.

Walter Issacion' book on Steve Jobs was great. I had first read the abridged version. Then when done wanting more I went back and listened to the unabridged version. I have. Degree in computers and this book was way too technical for me, somebody with less knowledge would be lost. This is the first book in a long time I contemplating putting down. I persevered and still one of my top five do not reads in my lifetime. I feel this did not need to be so technical to get their story across and broader audience may have enjoyed it.

This title is due for release on October 7, 2014
We'll send you an email as soon as it is available!