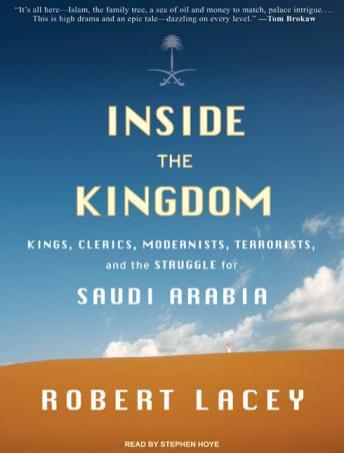 Inside the Kingdom: Kings, Clerics, Modernists, Terrorists, and the Struggle for Saudi Arabia

Saudi Arabia is a country defined by paradox. It is a modern state driven by contemporary technology and possessed of vast oil deposits, yet its powerful religious establishment would have its customs and practices rolled back a thousand years to match those of the prophet Muhammad.

With Inside the Kingdom, journalist and bestselling author Robert Lacey has given us one of the most penetrating and insightful looks at Saudi Arabia ever produced. While living for years among the nation's princes and paupers, its clerics and progressives, Lacey endeavored to find out how the consequences of the 1970s oil boom produced a society at war with itself.

Filled with stories that trace a path through the Persian Gulf War and the events of 9/11 to the oil-market convulsions of today, Inside the Kingdom gives us a modern history of the Saudis in their own words, revealing a people attempting to reconcile life under religious law with the demands of a rapidly changing world. Their struggle will have powerful reverberations around the globe, and this rich work provides a penetrating look at a country no one can afford to ignore.

This title is due for release on November 4, 2009
We'll send you an email as soon as it is available!