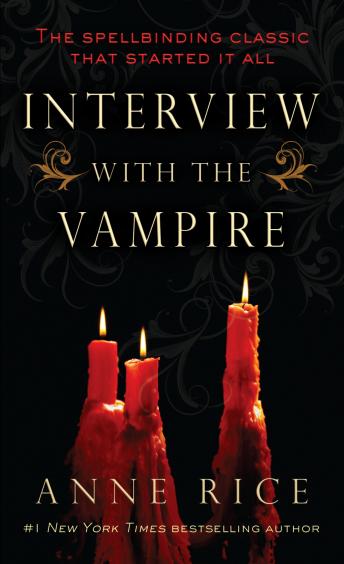 Interview with the Vampire

40th ANNIVERSARY EDITION • From the #1 New York Times bestselling author, 'a magnificent, compulsively readable thriller...Rice begins where Bram Stoker and the Hollywood versions leave off and penetrates directly to the true fascination of the myth—the education of the vampire” (Chicago Tribune). • The inspiration for the hit television series

The time is now.

We are in a small room with the vampire, face to face, as he speaks--as he pours out the hypnotic, shocking, moving, and erotically charged confessions of his first two hundred years as one of the living dead. . .

He speaks quietly, plainly, even gently . . . carrying us back to the night when he departed human existence as heir--young, romantic, cultivated--to a great Louisiana plantation, and was inducted by the radiant and sinister Lestat into the other, the 'endless,' life . . . learning first to sustain himself on the blood of cocks and rats caught in the raffish streets of New Orleans, then on the blood of human beings . . . to the years when, moving away from his final human ties under the tutelage of the hated yet necessary Lestat, he gradually embraces the habits, hungers, feelings of vampirism: the detachment, the hardened will, the 'superior' sensual pleasures.

He carries us back to the crucial moment in a dark New Orleans street when he finds the exquisite lost young child Claudia, wanting not to hurt but to comfort her, struggling against the last residue of human feeling within him . . .

We see how Claudia in turn is made a vampire--all her passion and intelligence trapped forever in the body of a small child--and how they arrive at their passionate and dangerous alliance, their French Quarter life of opulence: delicate Grecian statues, Chinese vases, crystal chandeliers, a butler, a maid, a stone nymph in the hidden garden court . . . night curving into night with their vampire senses heightened to the beauty of the world, thirsting for the beauty of death--a constant stream of vulnerable strangers awaiting them below . . .

We see them joined against the envious, dangerous Lestat, embarking on a perilous search across Europe for others like themselves, desperate to discover the world they belong to, the ways of survival, to know what they are and why, where they came from, what their future can be . . .

We follow them across Austria and Transylvania, encountering their kind in forms beyond their wildest imagining . . . to Paris, where footsteps behind them, in exact rhythm with their own, steer them to the doors of the Théâtre des Vampires--the beautiful, lewd, and febrile mime theatre whose posters of penny-dreadful vampires at once mask and reveal the horror within . . . to their meeting with the eerily magnetic Armand, who brings them, at last, into intimacy with a whole brilliant and decadent society of vampires, an intimacy that becomes sudden terror when they are compelled to confront what they have feared and fled . . .

In its unceasing flow of spellbinding storytelling, of danger and flight, of loyalty and treachery, Interview with the Vampire bears witness of a literary imagination of the first order.

Very exciting! Loved this version more than the movie! Great narrator, too!

That book is outstanding and pretty cool I might listen to it again someday. The narrator knows how to tell stories and I also think he’s outstanding.

Loved it what can I say the woman is brilliant

Such an elegantly woven story. Beautifully written book & the series is second to none

The start of my love affair with Anne Rice books.

I liked the narrator's way of using different voices. I 've seen the movie but never read the book. very well done

When I read this for the first time on paper, it was great. But listening to it made it boring.

beautiful story in a sad sense. though the god complex almost every character had made me see how confused most are. the narrator's voice in smooth but it made everyone sound old, not his fault but if there were a younger reader I'm sure it would be even more delightful.

Liked the movie better. There were some disturbing things about this book that even now give me the chills... thought it would be better. The narrator was okay.

Solid narration, consistent accents, but damn, this is a slow book. Starts pretty great but the second half just draaaags. I stopped caring about the characters well before the end.

This is really not a bad story line although it has a truly awful ending even though I'm sure the author would disagree with me. It was intended to be different in it's approach but what it actually is is disjointed. It leaves you feeling it's missing something. All in all not really a bad listen although it's a little on the boring side.

I just love the narrator of this particular audio book. The book itself is brilliant, but the audio version is fantastic, he really brings you into the story, captures and takes you away. Also, the story, is slightly abridged, but it works, and it works well. I highly recommend this book for listening, even if you're not an Anne Rice fan...it's worth it....

I read this book years agoa nd just thought I would enjoy it again. I did enjoy it. The narrator was perfect for the book. I enjoyed it on my commute to work each morning and home each afternoon.

I had begun this book over summer vacation and enjoyed what I had read of it but I never had a chance to finish. A very enjoyable listen during my work commute.

Boring and somewhat hard to follow. Not as good as I had hoped.

This title is due for release on May 31, 2011
We'll send you an email as soon as it is available!