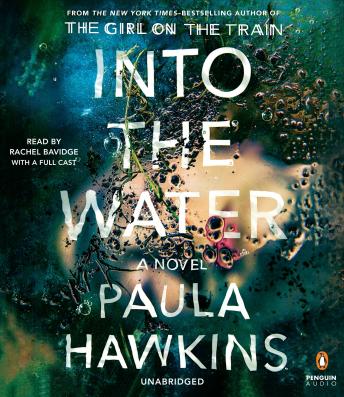 Into the Water: A Novel

The author of the #1 New York Times bestseller and global phenomenon The Girl on the Train returns with Into the Water, her addictive new novel of psychological suspense.

A single mother turns up dead at the bottom of the river that runs through town. Earlier in the summer, a vulnerable teenage girl met the same fate. They are not the first women lost to these dark waters, but their deaths disturb the river and its history, dredging up secrets long submerged.

Left behind is a lonely fifteen-year-old girl. Parentless and friendless, she now finds herself in the care of her mother's sister, a fearful stranger who has been dragged back to the place she deliberately ran from—a place to which she vowed she'd never return.

With the same propulsive writing and acute understanding of human instincts that captivated millions of readers around the world in her explosive debut thriller, The Girl on the Train, Paula Hawkins delivers an urgent, twisting, deeply satisfying read that hinges on the deceptiveness of emotion and memory, as well as the devastating ways that the past can reach a long arm into the present.

Beware a calm surface—you never know what lies beneath.

Liked the book but it was pretty dark.

Excellent book! Keeps you guessing and thinking throughout the whole thing! The narration is easy to listen to and the varied cast makes it easier to remember which character is narrating at the time.

The story was okay but there are so many characters its difficult to keep track of them all and initially hard to understand what was happening but towards the end it kind of got together.

I thought it was a bit dull.

This is an excellent book. Highly recommend!

I really do like this book, the going was getting good at first and then it started to lag interest toward the middle. I felt as though some characters POV were irrelevant and the plot twist at the end, Whoa!

This was just okay. It was not that mysterious I could see “who done it” early in the book.

Good book. It was a little confusing in the beginning because of all the different characters and the fact that flip back-and-forth for almost the entire book. But overall a pretty good read. I’m interested to see the movie and see how they will handle moving from one character to another. If you liked Girl on the the Train, this is another good one, but be aware that they are not similar at all. Enjoy!

The books was entertaining, full of dark intrigue and interesting plot, but I felt I never really knew the characters. Didn't quite believe the story, or the character Jules behavior. And though the readers were wonderful, having two different people reading one character was confusing.

Really enjoyed this book!! There were moments that really took me by surprise and I love that. Would definitely recommend this book to read.

Good book but very hard to follow. If you can understand the story line then you will have an easy time understanding

Good book. The story kept you guessing until the very end. I loved all the different narrators.

Thoroughly enjoyed this book...so many twists and curves. Liked the multiple narrators...it made it easy to follow.

Into the Water is a highly addictive read. The book is set in Beckford, a small British town obsessed with its dark past. When a single mother, Nel Abbott, is found dead in the river, her estranged sister Jules arrives to care for Nel’s teenage daughter Lena. As Jules learns more about her sister’s apparent suicide in the town’s Drowning Pool — and the many mysterious deaths that preceded it, including Lena’s best friend — she’s pulled further and further into a shadowy world where tragedy lurks, memory is unstable, and things are never as they seem. The novel, it must be said, contains all the elements that made The Girl on the Train famous in the first place. The narrative transfixes; its short chapters and multiple perspectives pull the reader in immediately, and refuse to let go until the very last page is turned. Into the Water is well-written, well-structured and well-crafted

Great book to listen to!

Pay attention Several characters are narrating the story from their perspective..suspenseful.. overall a decent story

It was a bit confusing keeping up with all the characters, but it still kept you on edge wondering what happens next. Twist of love, sadness, and friendships. I give it a thumbs up!

What a mess this book is! Too many characters, wandering disjointed storyline that tried too hard. Hawkins is a good writer but you wonder what got into her here. Unlikable characters and confusing narration made for a lo--ooonnng read

Paula Hawkins is a great writer but her prose doesn't make up for the disappointing story-line & character development. It was difficult to keep up with all the characters especially via audiobook. Overall, too many weak characters with too little development. The mystery is lacking and the "plot twists" are predictable. The narration was great.

Fantastic storyline, love the twists and turns. Really kept me guessing to the end.

Great book, kept me listening until the very end! The character of Jules is actually my favorite. Can't wait to see if they make this one into a film like her other novel

This is a hard book to listen to. I prefer to listen while I drive and workout. The plot and writing were excellent. The character changes were difficult to keep up with during a long run.

Really loved the book. First time listening to an audio book on my road trip and it was amazing! Made the trip fly by. Helped that the book was so intriguing.

It was difficult keeping track of the various characters, had I been reading this story myself it wouldn't have been an issue. Not sure if I really liked this story or not, it never "grabbed" me. I stayed with it though, to see if I I had figured things out right. All in all it was OK.

A great novel that kept you guessing until the very end.

Difficult to follow. Hard to assimilate the cast of characters. I found it frustrating until the last 2 hours, when it finally came together.

This book was picked by my book club and I am pretty disappointed. It is exclusively weak female characters constantly being victimized by men-very one dimensional. There were some interesting plot twists, that all seem to happen in the last three hours of the story. Additionally it was a little difficult to follow the transition of characters as the narrators' voices were fairly similar.

Doesn't disappoint. Excellent story. Kept me guessing until the end. Good depth of characters. Good story. I did have to listen to the fist hour or so twice in order to get the characters straight -- probably because it's audio rather than the written word. I'd recommend this one highly. When I wasn't able to listen to it (between chapters), I was thinking about the story and all The Who done it possibilities.

In the beginning it was a little hard to know what character they were talking about. Other then that, great book! Loved the narrators accent.

Kept me on the edge the whole time! Immersed completely in the story.

The story is full of surprises, looking forward to Paula Hawkins next book!

Hard to keep track of the characters at first, but stick with it because it hits a point where all the pieces fall together and it's sooo good!! Loved it!

Loved it! Just as good as the girl on the train. Twists constantly.

I can't say that I enjoyed it as much as Girl on the Train but it was still a good read!

If you like the girl on the train you will love this book.