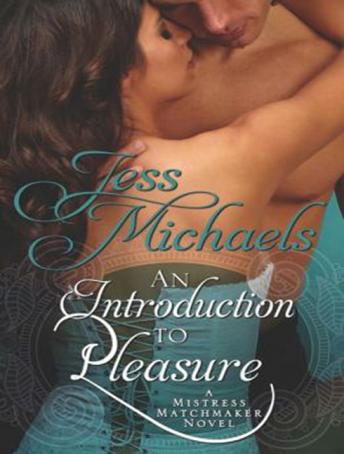 An Introduction to Pleasure

Lysandra Keates is running out of options. Her father is dead, her mother is ill, and her efforts to find respectable employment have ended in failure. With her small savings bleeding away, she swallows her pride-and her terror-and turns to Vivien Manning, an infamous courtesan, to match her with a wealthy protector.

For years, Viscount Andrew Callis has lived a monastic existence at his country estate, hardening his body against the snobbish, lazy young man he once was, hardening his heart against grief over the deaths of his wife and infant son. When Vivien asks him to spend one month training a young woman in the ways of a mistress, his mind resists . . . but his body responds with an ache he thought long dead.

As Andrew begins his gentle tutelage, he finds himself falling under the spell of Lysandra's innocent charms. And as they give in to the powerful hunger, the last thing Andrew ever expected, or wanted, forms between them. An emotional connection that could carry them well past the training period-if only Andrew can open his heart to the possibility of love.

I loved this one, had me all emotional. I’m glad he came to his senses, will read again, I love happy ending

A cliched concept and with some dubious issues around consent but as the story got going I found myself rooting for the couple. Well narrated, even though the vocabulary was a strange mixture of modern and historical.

Enjoyed the story line very much and loved the narration also. Well done!

Carmen Rose is a great narrator for this genre!

I was skeptical about whether I'd enjoy both the story and author. I prefer to hear a male when there's an equal male lead and since I'm American the accent sometimes can throw me off. However, I wasn't bothered at all by accent and actually based on time period it was quite fitting and enjoyed it very much. It fit our lead heroine well. I loved the backstory for both and is what made me fall in love with our leading heroine and hero! It kept me captivated and so well written using proper dialogue for the time period. Beautiful and sensual love story that had play on words of title perfect!

This title is due for release on November 26, 2013
We'll send you an email as soon as it is available!