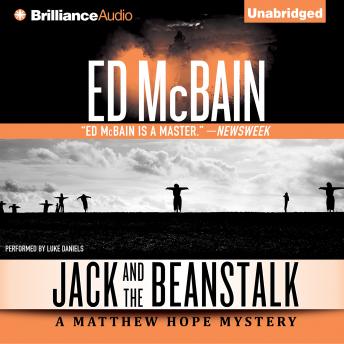 Jack and the Beanstalk

#4 of A Matthew Hope Mystery

Jack McKinney is a bright-eyed twenty-year-old in the business of buying a snapbean farm with forty grand in cash, and attorney Matthew Hope assists with the deal—until Jack’s found dead in his condo, stabbed fourteen times. The backwoods seller wants his forty grand pronto, but nobody can find the cash. And when Matthew pays a visit to the McKinney ranch, he gets more than he bargained for. Jack’s mother, Veronica, is a woman who looks half her years, with cool gray eyes to match her ambivalent attitude toward her son’s death. The only thing more dangerous than Veronica is daughter Sunny, the mirror image of her mother and a girl who can hold her liquor. Everyone seems to have a theory about the missing money, but Matthew’s the only one who can get to the bottom of the bum deal. The fourth installment of Ed McBain’s Matthew Hope Mysteries, Jack and the Beanstalk delivers our lawyer into a world of seedy folks, sour deals, and a family gone afoul.