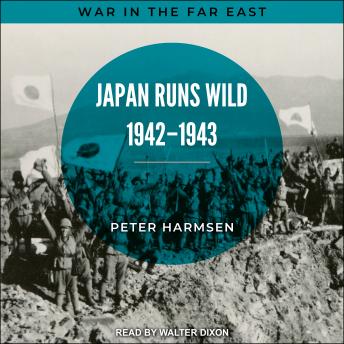 In early 1942, the Imperial Japanese Army and Navy were advancing on all fronts, humiliating Allied forces throughout the Pacific. In a matter of months, Japan had conquered an area larger than Hitler's empire at its apex. Hawaiians and Australians feared a future under Hirohito. The fate of half of mankind was hanging in the balance.

But by the end of 1943, the tables had turned entirely. The American-led military machine had kicked into gear, and the Japanese were fighting a defensive battle along a frontline that crossed thousands of miles of land and sea. In Japan Runs Wild, 1942-1943, historian Peter Harmsen details the astonishing transformation that took place in that period, setting the Allies on a path to ultimate victory over Japan.

The second installment of Peter Harmsen's three-part history, Japan Runs Wild, 1942-1943 continues his comprehensive chronicle of the Pacific Theater during the Second World War. Giving due emphasis to the Japanese-American struggle, Harmsen also sheds light on the other peoples involved, including the British, Australians, Soviets, Filipinos, Indians, and Koreans. Above all, the central importance of China is highlighted in a way that no previous general history of the war against Japan has achieved.