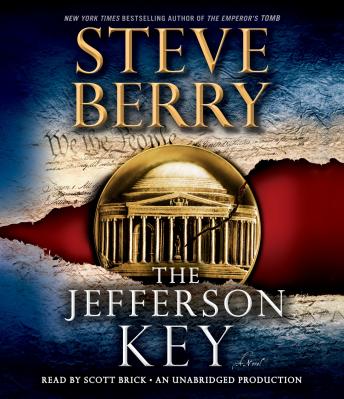 The Jefferson Key: A Novel

Four United States presidents have been assassinated—in 1865, 1881, 1901, and 1963—each murder seemingly unrelated and separated by time.

But what if those presidents were all killed for the same reason: a clause in the United States Constitution—contained within Article 1, Section 8—that would shock Americans?

This question is what faces former Justice Department operative Cotton Malone in his latest adventure. When a bold assassination attempt is made against President Danny Daniels in the heart of Manhattan, Malone risks his life to foil the killing—only to find himself at dangerous odds with the Commonwealth, a secret society of pirates first assembled during the American Revolution. In their most perilous exploit yet, Malone and Cassiopeia Vitt race across the nation and take to the high seas. Along the way they break a secret cipher originally possessed by Thomas Jefferson, unravel a mystery concocted by Andrew Jackson, and unearth a centuries-old document forged by the Founding Fathers themselves, one powerful enough—thanks to that clause in the Constitution—to make the Commonwealth unstoppable.

This is probably my favorite book so far in the Cotton Malone series! In addition, Scott Brick is one of my favorite narrators. A win/win situation for me!

As a history buff I truly appreciate when at the end of his book the author explains what was truth and what was fiction. This was a GREAT example of making history enjoyable to learn. I had no idea the role that Privateering played in the birth of our fledgling nation and what we owe to those pirates, and now I do.

This title is due for release on May 17, 2011
We'll send you an email as soon as it is available!