The Judgment of Paris: The Revolutionary Decade That Gave the World Impressionism 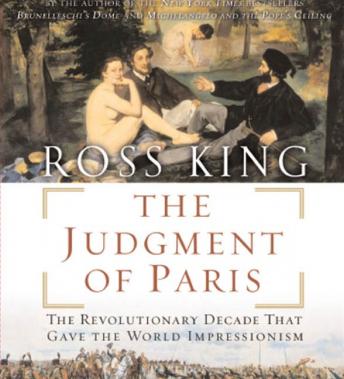 While the Civil War raged in America, another very different revolution was beginning to take shape across the Atlantic, in the studios of Paris: The artists who would make Impressionism the most popular art form in history were showing their first paintings amidst scorn and derision from the French artistic establishment. Indeed, no artistic movement has ever been, at its inception, quite so controversial. The drama of its birth, played out on canvas, would at times resemble a battlefield; and, as Ross King reveals, Impressionism would reorder both history and culture as it resonated around the world.

The Judgment of Paris chronicles the dramatic decade between two famous exhibitions-the scandalous Salon des Refuses in 1863 and the first Impressionist showing in 1874-set against the rise and dramatic fall of Napoleon III and the Second Empire after the Franco-Prussian War. A tale of many artists, it revolves around the lives of two, described as 'the two poles of art'-Ernest Meissonier, the most famous and successful painter of the 19th century, hailed for his precision and devotion to history; and Edouard Manet, reviled in his time, who nonetheless heralded the most radical change in the history of art since the Renaissance. Out of the fascinating story of their parallel lives, illuminated by their legendary supporters and critics-Zola, Delacroix, Courbet, Baudelaire, Whistler, Monet, Hugo, Degas, and many more-Ross King shows that their contest was not just about Art, it was about competing visions of a rapidly changing world.

With a novelist's skill and the insight of an historian, King recalls a seminal period when Paris was the artistic center of the world, and a revolutionary movement had the power to electrify and divide a nation.

Judgment of Paris: The Revolutionary Decade That Gave the World Impressionism

This title is due for release on January 10, 2006
We'll send you an email as soon as it is available!