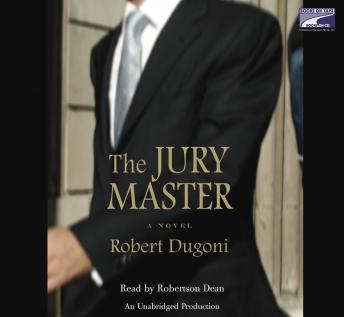 In a courtroom, David Sloane can grab a jury and make it dance. He can read jurors' expressions, feel their emotions, know their thoughts. With this remarkable ability, Sloane gets juries to believe the unbelievable, excuse the inexcusable, and return the most astonishing verdicts. The only barrier to Sloane's professional success is his conscience–until he gets a call from a man later found dead, and his life rockets out of control.

The call is from Joe Branick, special assistant and personal friend of the President of the United States, made just hours before Branick swallows his own gun. In a single moment, the death of a man Sloane has never met propels the jury master out of his successful life and into a whirlwind that is shattering lives from San Francisco to Washington, D.C.

To get back his life, Sloane needs to know more. About Branick. About others who are in as much danger as he is. And about the president and his men. But in the face of a secret that spans decades and governments, and puts millions of dollars at risk, there's one thing David Sloane can't possibly envision: that this runaway conspiracy is all about him–and only he can stop it.

A whole new kind of thriller from a remarkable new writer, THE JURY MASTER hurtles through one hairpin turn into another. As a brilliant attorney fights for his life, he gets closer and closer to an explosive truth: about who he is, how little he knows, and who is the master of his fate….

This book was all over the place. It was super hard to follow. The narration was great, but trying to listen and put all the places and people together was hard.

Big disappointment. This book is all over the place. How did it get from jury master to Mexican bandits????this book tries to be James Bond and a tired, cliched love story. I couldn’t wait for it to be over. Bad experience. Didn’t care what happened to the cardboard characters I. This mess of a book.

I was expecting to listen to a book about lawyers the law in court rooms. What I got was a Jason bourne rip off. Overall the book was a bad, but if you’re looking for a lawyer book This is not it. The narrator was a bad

Absolutely fantastic. Watched the series “Longmire”. Not as good as the book. Very good and sometimes subtle humor in the book. I saw Wounded Knee Burial grounds and love the Indian lore. Cried after reading Bury My Heart At Wounded Knee.

I’m thrilled to have found Robert Dugoni! He’s an excellent writer and I also love his narrators. I hope he continues to write.

This title is due for release on March 14, 2006
We'll send you an email as soon as it is available!