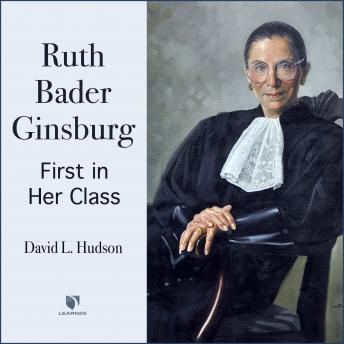 Join bestselling author and constitutional scholar David L. Hudson, Jr. for awe-inspiring listening on the life and career of one of the most revered Supreme Court justices in U.S. history.

Ruth Bader Ginsburg, the second woman ever to serve on the U.S. Supreme Court, was already a legendary lawyer before she ever became a federal judge. For many years, she brilliantly litigated gender discrimination cases, including several that reached the Supreme Court. In her later years, her legal victories and lifelong commitment to justice elevated her to the status of pop culture icon when she became known as "the Notorious RBG."

In this engrossing 12-lecture audio series, Supreme Court expert David L. Hudson Jr. provides an inside look at Ginsburg's life and career from her childhood in Brooklyn to her 27-year tenure on the Court of Last Resort. You'll get to know her as a young woman who overcame personal tragedy, antisemitism, and sexism to graduate at the top of her class and gain acceptance to Cornell University.

You'll then follow Ginsburg on her boundary-breaking trajectory through law school and into her early advocacy as an attorney, her appointment to the D.C. Circuit Court of Appeals, and her confirmation hearing before the U.S. Senate. As you examine her most famous opinions and dissents, you'll gain renewed admiration for the woman behind the powerful pen.