Keyshia and Clyde: A Novel 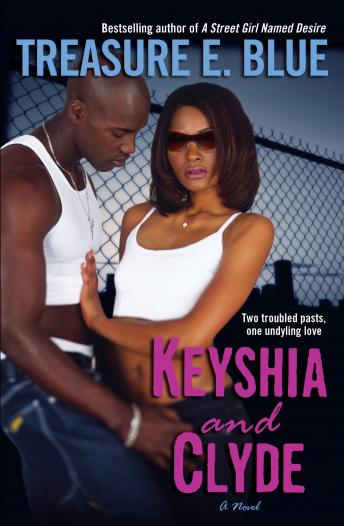 Treasure E. Blue–acclaimed author of Harlem Girl Lost and A Street Girl Named Desire–is back with a heartbreaking urban love story of two star-crossed lovers up against the dirtiest dealer Harlem has ever seen.

Knocked up by a Southern preacher, Keyshia is sent to live with her aunt in New York, but after a horrific act of violence, the timid young woman becomes ice-cold–turning tricks and finding comfort in a crack vial.

Clyde and his two brothers find themselves living with a family friend after their mother is shot by their own father–leaving her institutionalized and unable to communicate, and him behind bars. Clyde’s older brother leads a decent life, working as a bank manager and trying to keep Clyde off the streets, but Clyde’s younger bro is the coldest killer in Harlem and takes every opportunity to involve Clyde in his infamous robberies-turned-blood baths.

When Keyshia and Clyde meet, they are instantly drawn to each other. Forced to pay back a large sum of cash to one nasty Harlem kingpin or risk the lethal consequences, Keyshia and Clyde use their tight game and their loyalty to pull off the impossible. And when Clyde is falsely accused of a bank hit, Keyshia vows to stick by her man–no matter the cost.

“Treasure Blue continues and solidifies his position as the true heir to Iceberg Slim and Donald Goines. A book full of gritty realism, violence, drug abuse, and hope; the book is simply off the damn hook!”
–African American Literary Book Club

“Drenched in drama, drugs, vengeance, power, pain, envy, love and hope . . . all the elements needed to satisfy [the] desire for a good read.”
–Urban Reviews

Keyshia and Clyde: A Novel

This title is due for release on November 17, 2009
We'll send you an email as soon as it is available!