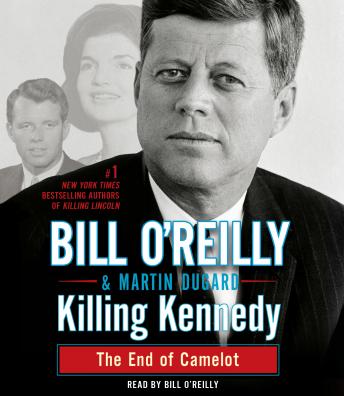 Killing Kennedy: The End of Camelot

A riveting historical narrative of the shocking events surrounding the assassination of John F. Kennedy, and the follow-up to mega-bestselling author Bill O'Reilly's Killing Lincoln.

The basis for the 2013 television movie of the same name starring Rob Lowe as JFK.

More than a million people have enjoyed Bill O'Reilly's Killing Lincoln, the can't-stop-listening work of nonfiction about the shocking assassination that changed the course of American history. Now the iconic anchor of The O'Reilly Factor recounts in gripping detail the brutal murder of John Fitzgerald Kennedy—and how a sequence of gunshots on a Dallas afternoon not only killed a beloved president but also sent the nation into the cataclysmic division of the Vietnam War and its culture-changing aftermath.

In January 1961, as the Cold War escalates, John F. Kennedy struggles to contain the growth of Communism while he learns the hardships, solitude, and temptations of what it means to be president of the United States. Along the way he acquires a number of formidable enemies, among them Soviet leader Nikita Khrushchev, Cuban dictator Fidel Castro, and Alan Dulles, director of the Central Intelligence Agency. In addition, powerful elements of organized crime have begun to talk about targeting the president and his brother, Attorney General Robert Kennedy.

In the midst of a 1963 campaign trip to Texas, Kennedy is gunned down by an erratic young drifter named Lee Harvey Oswald. The former Marine Corps sharpshooter escapes the scene, only to be caught and shot dead while in police custody.

The events leading up to the most notorious crime of the twentieth century are almost as shocking as the assassination itself. Killing Kennedy chronicles both the heroism and deceit of Camelot, bringing history to life in ways that will profoundly move the listener.

Love your books Bill, struggling with loosing you on the FOX network this week. Felt you were the best, most balanced NO SPIN commentator on the station. YOU'LL BE MISSED. Hoping to see you bounce back and show them, in your calm demeanor, you are not phased. Regarding Killing Kennedy, I LOVED IT!! Especially with you narrating it. I grew up in Massachusetts a Kennedy supporter, before the Democratic Party Died A Fate Worse Than Kennedy Itself. I actually shook Robert Kennedy's hand in his last Boston St. Patrick's Day Parade and equally mourned his and John Jr.'s death. I enjoyed your detailed account of JFK's life, while reliving all the chapters I could remember from my childhood. Surprised to hear your account of yourself knocking on the door of the FBI connected Oswald supporter as he took a shotgun to his head to die with the secretes we may never know the truth to. I HIGHLY recommend Killing Kennedy to anyone interested in hearing about all the details of this great Presidents historic life and Lincolnesque final chapter.

I look forward to my walks listening to all of O'Reilly's Killing Series books. All of them have been done magnificently.

Great book. I love it!

Bill O'Reilly narrates in offhanded way which is disconcerting. There is nothing new here. I've traded better.

One of the best reads ever

This book did a great job encompassing JFKs life. I enjoyed reading the book and would definitely reread it!

Enjoyed Bill’s narration. But, with all his connections, he should have presented both sides of the “conspiratorial” debate. The hard-sell Oswald was alone sounds like Bill is on the cover-up sids. Hardly a “no-spin” way of addressing such an important historical debate.

Great book, had to take a break before the assassination took place, due to becoming attached to the characters... Enjoyed the Bill O'Reilly twist towards the end as well, did not see the coming, more mindblown than JFK!!! Maybe that's distasteful, but funny none the less...

I learned some more facts about JFK, Camelot, and the assassination. Nice Job!

A fantastic read for a Boston native with interests in one of its many legendary native sons.

This is the first book that I have enjoyed using audiobooks. I look forward to the next book, the killing of Lincoln.

We listened to this book in its entirety on our way home from vacation. We learned so much, was entertained and the trip went quickly!! Ready for our next trip!

The reader articulated well. The book was also good.

Once again Bill O'Reilly does a fabulous job in research of historical fact. The presentation was amazing and precise. If anyone wants to learn about the political working of this time I would recommend this book.

My second Billy OReilly book. I have enjoyed both. Will down load remaining books. Narrator(s) both Bill Martin very good.

I was looking for conspiracy theories but I did not get what I expected.

The author does a good job of following the time lines of the individuals who take part in the story. I found the narration easy to hear and understand. These assassination stories testify that evil really does exist as an absolute. The idea that good and evil are only distinguishable in the light of value systems is blown away in my view.

I thoroughly enjoyed this book and, since I listen to books during my commute to and from work, drove around the block a few times just to reach the end of a chapter! I'm ordering "Killing Lincoln" for sure!