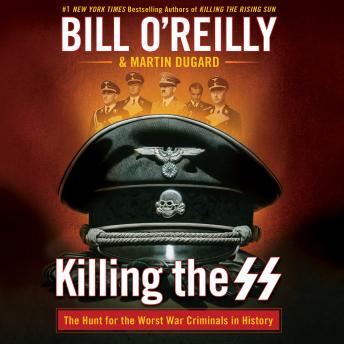 Killing the SS: The Hunt for the Worst War Criminals in History

As the true horrors of the Third Reich began to be exposed immediately after World War II, the Nazi war criminals who committed genocide went on the run. A few were swiftly caught, including the notorious SS leader, Heinrich Himmler. Others, however, evaded capture through a sophisticated Nazi organization designed to hide them. Among those war criminals were Josef Mengele, the “Angel of Death” who performed hideous medical experiments at Auschwitz; Martin Bormann, Hitler’s brutal personal secretary; Klaus Barbie, the cruel 'Butcher of Lyon'; and perhaps the most awful Nazi of all: Adolf Eichmann.

Killing the SS is the epic saga of the espionage and daring waged by self-styled 'Nazi hunters.' This determined and disparate group included a French husband and wife team, an American lawyer who served in the army on D-Day, a German prosecutor who had signed an oath to the Nazi Party, Israeli Mossad agents, and a death camp survivor. Over decades, these men and women scoured the world, tracking down the SS fugitives and bringing them to justice, which often meant death.

Written in the fast-paced style of the Killing series, Killing the SS will educate and stun the listener.

The final chapter is truly shocking.

I love history and I love Bill

The best killing book of all. Fantastic Jeffrey T

Not my favorite of the series, although I couldn’t stop listening. Well known stories that have been documented and written many times with a similar flow. I would have wanted to hear more about SS officers less known.

First time reader of the Killing series. Will be reading more. I am a History buff and have majored in history at college. But there are things that college did not nor does not make you aware of some of the things that were done to others by their captors Very good listen. Would recommend this others that are history buffs

A very interesting documentation of the horror perpetrated by evil people and the raw courage of a few people determined to make them accountable and bring them to face justice. Compelling and highly recommended

Worth a listen for anyone interested in WW2, but I found the narrator’s voice like a machine gun with no variation.

Very informative as are all of the “Killing” books by this author.

Incredible to think in the internet age Nazi war criminals are still at large Shame on the countries that have harbored them.

This is a great historical look at the Holocaust and its aftermath. My second favorite killing book under Lincoln.