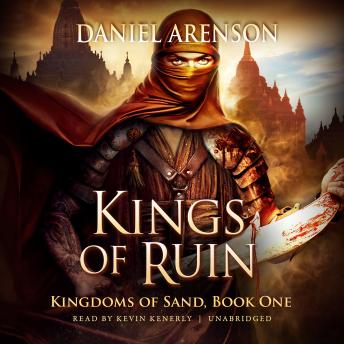 #1 of The Kingdoms of Sand Series

In an ancient world of sand and splendor, an empire awakens.

Aelar, a mighty nation, spreads its tentacles. Its oared galleys storm the seas, and the waters run red with blood. Its legionaries swarm desert ruins, smiting barbarian hordes. Its crosses line the roadsides, displaying the dying flesh of heroes.

The powerful Sela family has avoided the empire until now. The family has carved out an idyllic life between sea and desert, ruling a bustling port, a thriving city, and lush vineyards. Yet when an imperial fleet arrives in their harbor, everything the Sela family has built threatens to collapse.

Sweeping from snowy forests to cruel deserts, from bazaars of wonder to fields of war, here is a tale of legionaries and lepers, priests and paupers, kings and crows. Here a girl travels across endless dunes, seeking magic; a cruel prince struggles to claim a bloodstained throne; and a young soldier fights to hold back an overwhelming host. As the empire spreads, the fate of the Sela family—and of all civilization—stands upon a knife’s edge, for under the storm of war, even the greatest nations are but kingdoms of sand.

Not my cup of tea