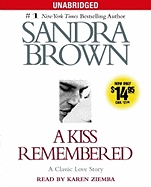 Shelley Browning, recovering from a disastrous marriage, is determined to get the college degree she abandoned to wed a young doctor. She's back at Oklahoma University at age twenty-six, a little older and a lot wiser. But Shelley can't explain why she takes a class in government taught by Grant Chapman -- except that she feels compelled to see him again.
Ten years ago Grant was the best-looking teacher in her high school. He left after a few months to take a glamorous job as a congressional aide, but not before 'the kiss.' Unplanned, stunningly hot, and never repeated, a single kiss with Grant haunted Shelley as a symbol of 'what might have been' with the right man.
Now famous and as charismatic as ever, Grant has abandoned the rat race on Capitol Hill for a university career. Pleased to find Shelley in his classroom, delighted by her honesty and, believing there is no impropriety in dating her, he asks her out.
Isn't that what Shelley has secretly hoped would happen? Never had she felt more confused about what she really wants. As their relationship grows, guilt mingles with desires she cant deny. Her heart longs to trust Grant; her head thinks intimacy is too risky -- for both of them. And when a stunning accusation emerges and pressures mount from unexpected sources, Shelley is faced with making a leap of faith to believe in love...or with walking away from the man of her dreams.

This was the weakest Sandra Brown book ever. What a waste. I've read better Harlequin Romance books.

This book just wore me out. More and more sex, over and over and over. I kept fast forwarding looking for the story line. I finally just cut it off and moved on.

I think I am going to stop renting Sandra Brown books. The last three have been disappointing - this is no exception. The write-up sounded interesting, but listening to the book was a chore. I stopped it multiple times to listen to the radio, it was so tired and boring!!

This was a good book but not great. It was very predictable and I stopped listening several times. I like Sandra Brown's writting very much but this could have been spicier or just stronger story. I like strong charactor developement. It helps the reader connect with the story. This one .... I did not.

I generally like Sandra Brown very much, but this book seemed to have a lot more steam than story line.

Book was a little slow...waste of my time!!! Not the norm for Sandra Brown.

This book is good for a romance. Fun to listen to while cleaning your house!!! I never enjoyed cleaning my house so much before. Everything was predictable, you didn't have to think or concentrate.

What a waste of time. This was a poorly written harlequin romance book. There was no ability to attach or even like the characters, they where like hormone driven teenagers with the inability to control themselves. This was 5 hours of drival.

Not one of my favorite Sandra Brown books. I think I like her mysteries better and not so much her romance.

Somehow when I rented this I wasn't thinking about the romance "sex scenes" and how that would play driving down the highway. Let me tell you, it doesn't. This book was more like a Harlequin romance read aloud and I won't repeat the experience. The story is very predicatable and Sandra Brown has written much better works.

I ususally love Sandra Brown and her romantic work. However, this book was boring, and exaggerated. It was not set in current time. I got through the 2nd CD and couldn't take anymore---there are better books out there to listen to.

I love Sandra Brown, this book was not one of her best.

Honestly, I love Sandra Brown. I got hooked with the audiobook "Standoff" and have listened to several others. This book was terrible, boring and VERY predictable. Although I usually recommend Sandra Brown novels, skip this one.

I have never read Sandra Brown, and I don't often read romance novels. If this is a prime example, then I'm glad I've never wasted my time. The plot and characters were so trite, contrived and unrealistic. If women want to read sex scenes (which I have nothing against) then just get a book of erotica, and save yourself the filler in between the sex scenes!

This title is due for release on April 1, 2002
We'll send you an email as soon as it is available!