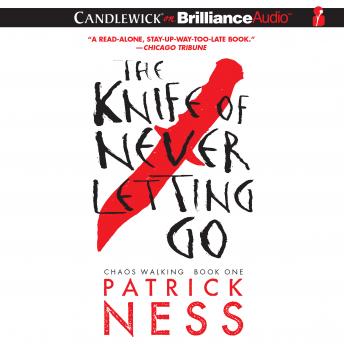 The Knife of Never Letting Go

“Narrated with crack dramatic and comic timing. . . . The cliffhanger ending is as effective as a shot to the gut.” — Booklist (starred review)

Todd Hewitt is the only boy in a town of men. Ever since the settlers were infected with the Noise germ, Todd can hear everything the men think, and they hear everything he thinks. Todd is just a month away from becoming a man, but in the midst of the cacophony, he knows that the town is hiding something from him — something so awful Todd is forced to flee with only his dog, whose simple, loyal voice he hears too. With hostile men from the town in pursuit, the two stumble upon a strange and eerily silent creature: a girl. Who is she? Why wasn't she killed by the germ like all the females on New World? Propelled by Todd's gritty narration, readers are in for a white-knuckle journey in which a boy on the cusp of manhood must unlearn everything he knows in order to figure out who he truly is.

This is a great book!! I advise everyone who picks up to read it!

Love this book! It’s a fairly easy read. I enjoyed the fact that there was no swearing or sexual interactions. I will usually listen to books on my earphones because I don’t want the kids to hear, but with this book I could play it out loud while cooking and doing the dishes! Nick Podehl is one of my favourite narrators and I only stumbled upon this trilogy because I was looking through the books he has read! The storyline is interesting and fast paced! The author draws you in quickly and keeps you guessing what will happen next! I laughed out loud a few times and also cried a few times too! I love Manchi the dog! He was my favourite! I’m excited to start book #2! I hope it’s as good as book #1!

Amazing book! I’m glad I took a chance on it! Narrator was great and comfortable to listen to.