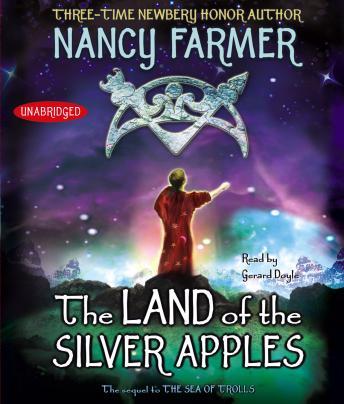 The Land of the Silver Apples

#2 of Sea of Trolls Trilogy

“Like the druidic life force Jack taps, this hearty adventure, as personal as it is epic, will cradle readers in the ‘hollow of its hand’ (Booklist, starred review).

Jack has caused an earthquake. He was trying to save his sister Lucy from being thrown down a well, but sometimes the magic doesn’t quite work out. Not only does Jack demolish a monastery, but Lucy is carried off by the Lady of the Lake, and Jack has to follow her through the Hollow Road, which lies underground.

Aided by Pega, a slave, and the berserker Thorgil, Jack encounters hobgoblins, kelpies, yarthkins, and elves—not the enchanted sprites one would expect, but fallen angels who steal human children for pets. In the eighth century, the world is caught between belief in the Old Gods and Christianity, and what Jack and his companions do will decide the fate of both religions.

From National Book Award winner Nancy Farmer, this second book in the Sea of Trolls trilogy brilliantly enlarges the world of the first story. Look for the conclusion in The Islands of the Blessed.

This is the conclusion of one of my favorite series. I read it in my early teens, it's good to back in my 20's now. It's nastalgic but totally new at the same time. I love Nancy Farmer and anything Gerard Doyle reads he does an excellent job.

The recording is out of order and there are random cuts of some BS religious indoctrination thing that lasts for like 20 minutes at a time...

This title is due for release on August 21, 2007
We'll send you an email as soon as it is available!