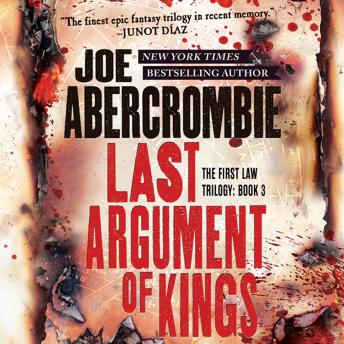 #3 of The First Law Trilogy

Logen Ninefingers might only have one more fight in him -- but it's going to be a big one. Battle rages across the North, the king of the Northmen still stands firm, and there's only one man who can stop him. His oldest friend, and his oldest enemy: it's time for the Bloody-Nine to come home.

With too many masters and too little time, Superior Glokta is fighting a different kind of war. A secret struggle in which no one is safe, and no one can be trusted. As his days with a sword are far behind him, it's fortunate that he's deadly with his remaining weapons: blackmail, threats, and torture.

Jezal dan Luthar has decided that winning glory is too painful an undertaking and turned his back on soldiering for a simple life with the woman he loves. But love can be painful too -- and glory has a nasty habit of creeping up on a man when he least expects it.

The king of the Union lies on his deathbed, the peasants revolt, and the nobles scramble to steal his crown. No one believes that the shadow of war is about to fall across the heart of the Union. Only the First of the Magi can save the world, but there are risks. There is no risk more terrible, than to break the First Law. . .

I thought this book was pretty good but, not a great ending almost like there should be more to come.

great story! i really enjoyed it ans the narrators skill.

This book sums up the hopeless, dark downward spiral of the trilogy. Everything only gets more depressing. You end up hating most of the main characters by the end. Abercrombie is an amazing writer in terms of detail and telling of the story. The plot of this trilogy is my complaint. If you're one for happy endings, don't waste your time with this book.

Say one thing about Joe, say he can write some very awesome characters. I’m not a huge fan of the world building in these books but the plot twists and the characters make up for it in spades. Glockta and Logen are some of my favorite characters in fantasy writing.

Great series, so crazy to realize that Salt was actually trying to do the right thing Lmfao

Great Trilogy for reading and I was pleasantly surprised that the narrator does it justice snd portrays the characters so well.

Logan,Glokta, Ferro,Jissel and even Bayez are amazing characters with the other supporting characters from the north and styria and the circle of the world this was a wonderful conclusion to first two books. The end was a bit rushed but still made the book amazing.