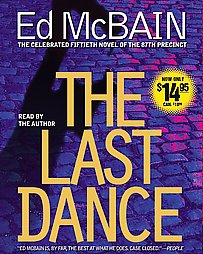 The Last Dance: A Novel of the 87th Precinct

The fiftieth novel in the 87th Precinct series, Ed McBain returns to Isola, where detectives Meyer Meyer and Steve Carella investigate a murder which leads them to the seedy strip clubs and bright lights of the theater district.

The hanging death of a nondescript old man in a shabby little apartment in a meager section of the 87th Precinct was nothing much in this city, especially to detectives Carella and Meyer. But everyone has a story, and this old man’s story stood to make some people a lot of money. His story takes Carella, Meyer, Brown, and Weeks on a search through Isola’s seedy strip clubs and to the bright lights of the theater district. There they discover an upcoming musical with ties to a mysterious drug and a killer who stays until the last dance.

The Last Dance is Ed McBain's fiftieth novel of the 87th Precinct and certainly one of his best. The series began in 1956 with Cop Hater and proves him to be the man who has been called “so good he should be arrested.”

This title is due for release on January 1, 2000
We'll send you an email as soon as it is available!