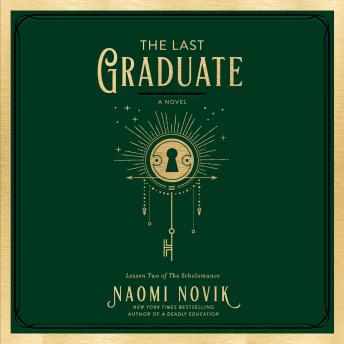 The Last Graduate: A Novel

“The climactic graduation-day battle will bring cheers, tears, and gasps as the second of the Scholomance trilogy closes with a breathtaking cliff-hanger.”—Booklist (starred review)

In Wisdom, Shelter. That’s the official motto of the Scholomance. I suppose you could even argue that it’s true—only the wisdom is hard to come by, so the shelter’s rather scant.

Our beloved school does its best to devour all its students—but now that I’ve reached my senior year and have actually won myself a handful of allies, it’s suddenly developed a very particular craving for me. And even if I somehow make it through the endless waves of maleficaria that it keeps throwing at me in between grueling homework assignments, I haven’t any idea how my allies and I are going to make it through the graduation hall alive.

Unless, of course, I finally accept my foretold destiny of dark sorcery and destruction. That would certainly let me sail straight out of here. The course of wisdom, surely.

But I’m not giving in—not to the mals, not to fate, and especially not to the Scholomance. I’m going to get myself and my friends out of this hideous place for good—even if it’s the last thing I do.

With keen insight and mordant humor, Novik reminds us that sometimes it is not enough to rewrite the rules—sometimes, you need to toss out the entire rulebook.

The magic of the Scholomance trilogy continues in The Golden Enclaves

So just finished this series and again its pretty decent. The ending saved so general comments I had along the book however as I mentioned on the first book the single person narrative on one individual the entire book for hours is draining at times and make hard to tune in focus. One person's point of view, one person's thought process, with the camera not aligning or developing anyone else eats away at your focus especially for synopsis built around an temperamental teenage that's angry all the time. So unfortunately if the last book come out i have read it....I'm invested and not knowing the true ending is worse that not knowing being i started it

A great follow up to 'A Deadly Education'. Novik expands the world, and adds more detail to everything. We learn more about the school and it's history which is fascinating. Character arcs are expanded and the book keeps a steady pace throughout. There's more tension in this book and ratchets up to a pretty action packed ending leaving me eaglery awaiting the final book. Once again, narration is a highlight.

I'm waiting impatiently for the next one. Engaging and well paced read.

I love this series! This story was great. The last line was too much. Definitely going to be waiting for the next one.