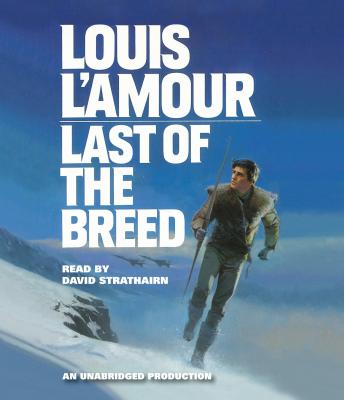 Last of the Breed

“For sheer adventure L’Amour is in top form.”—Kirkus Reviews

Here is the kind of authentically detailed epic novel that has become Louis L’Amour’s hallmark. It is the compelling story of U.S. Air Force Major Joe Mack, a man born out of time. When his experimental aircraft is forced down in Russia and he escapes a Soviet prison camp, he must call upon the ancient skills of his Indian forebears to survive the vast Siberian wilderness. Only one route lies open to Mack: the path of his ancestors, overland to the Bering Strait and across the sea to America. But in pursuit is a legendary tracker, the Yakut native Alekhin, who knows every square foot of the icy frontier—and who knows that to trap his quarry he must think like a Sioux.

To begin my review, I must first mention that I despise fiction writing. I enjoy learning and hearing about factual events, and I don’t want to spend hours of my time reading a novel where I have to imagine my own ending. Several years ago an old friend suggested that I read this book. “If you don’t read nothing else, you just gotta at least read this one book before you die”, he said. I gave him my word that if i were ever so bored that i was willing to read some work of fiction, his suggestion would be the one i chose. He passed away a few weeks ago, and I figured before I join him I should, at the very least, make good on my word. I assumed I would make it through a couple chapters before begging to join him, rather than submitting my eyes and brain to the torture of reading such nonsense. To my astonishment, I made it through the 1st two chapters without trying to gouge my eyeballs out with the nearest blunt object. As a matter of fact, from the moment the narrator spoke his first word, to the last line of the book, I could not get enough! I found myself trying steal time from everything in my life, to be able to listen to just a few more words. Louis L’Amour’s masterful use of words, to describe every single thing that mattered, not only made me feel as though I were in the tundra of Siberia, I found myself actually smelling the earth, and fresh air, and forrests of the distant land. His words wrapped my mind, so tightly, around a carachter and story that I felt as though I were part of the drama unfolding with each sentence. This book alone, forever changed my opinion of fictional writing, and if you don’t ever read nothing else, you gotta at least read this one book before you die.

Have read this book twice before now have listened to it. One of Louis L best

Loved it. It was a recommendation and my first Louis L'amour (although i am currently reading two other's as well simultaneously. Start to finish, not only myself but my significant other joined this super fun listen/ adventure! wish there was a sequel...i am such a fan of Louis's novels and stories that i can't imagine a life without them. Everyone else who has the opportunity to give it a whirl- This is a fun and worthwhile treat for your time. L'Amour never dissapoints. The narrator (David Stathairn- perfect!) Thankyou audiobooks!

This is a great book, I read it year's ago and loved it. It was exciting and held my interest I didn't want to put it down. I love to read but lately just don't have the time listening to the story is a great new option for me, I was able to hear the proper pronunciation of the names and places, as well as the feeling of the narrator. I have always enjoyed watching David Strathairn he is an excellent narrator.

I read this book 30+ years ago. It was one I always remembered and shared with others. It was fun to listen to and hear the proper pronunciation of all the Russian names and places. The narrator did a great job.