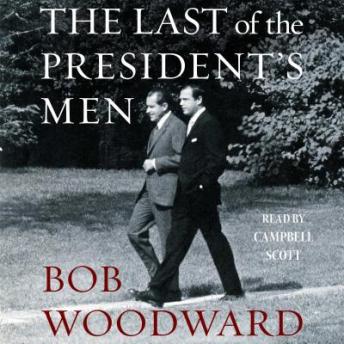 The Last of the President's Men

Bob Woodward exposes one of the final pieces of the Richard Nixon puzzle in this “intimate but disturbing portrayal of Nixon in the Oval Office” (The Washington Post).

“Four decades after Watergate shook America, journalist Bob Woodward returns to the scandal to profile Alexander Butterfield, the Richard Nixon aide who revealed the existence of the Oval Office tapes and effectively toppled the presidency…Woodward re-creates detailed scenes, which reveal the petty power plays of America’s most powerful men…a close-up view of the Oval Office in its darkest hour” (Kirkus Reviews). In The Last of the President’s Men, Woodward reveals the untold story based on forty-six hours of interviews with Butterfield, supported by thousands of documents—many of them original and not in the presidential archives and libraries—and uncovered new dimensions of Nixon’s secrets, obsessions, and deceptions.

“This volume…amplifies (rather than revises) the familiar, almost Miltonian portrait of the thirty-seventh president…as a brooding, duplicitous despot, obsessed with enemies and score-settling and not the least bit hesitant about lying to the public and breaking the law” (The New York Times). Today, The Last of the President’s Men could not be more timely and relevant as voters question how much do we know about those who are now seeking the presidency in 2016—what really drives them, how do they really make decisions, who do they surround themselves with, and what are their true political and personal values? This is “yet another fascinating gift to history by DC’s most relentless reporter” (Politico).

Bob Woodward has always given an historical intrigue into the political scene. Living through the Watergate event; it was good adding another part to this presidential blunder. Also to hear the story of Alexander Butterfield was another authentic piece to the mystery.