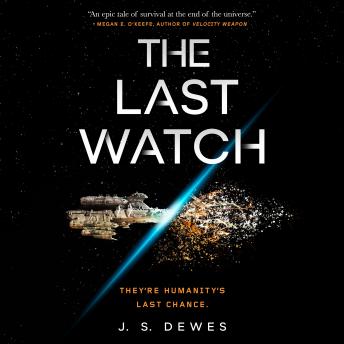 #1 of The Divide Series

'Both readers are brilliant and nail the characterization in a way that instantly connects them to the listener..Everything here is top-notch.' -- Booklist, starred review

The Expanse meets Game of Thrones in J. S. Dewes's fast-paced, sci-fi adventure The Last Watch, where a handful of soldiers stand between humanity and annihilation.

It’s the edge of the universe.

Now it’s collapsing—and taking everyone and everything with it.

The only ones who can stop it are the Sentinels—the recruits, exiles, and court-martialed dregs of the military.

At the Divide, Adequin Rake commands the Argus. She has no resources, no comms—nothing, except for the soldiers that no one wanted. Her ace in the hole could be Cavalon Mercer--genius, asshole, and exiled prince who nuked his grandfather's genetic facility for “reasons.”

Haven’t fallen in love with a book in a while. I’ve read books I like a lot, but this debut novel from J.S. Dewes turned out to be just a fantastic read. It had some minor issues, nothing’s perfect, but nothing that took me away from the story ***Minor Spoilers*** As many of said, it’s very much like the Night’s watch in space. But they aren’t watching free folk or white walkers on a wall. They’re watching for an invading alien force, the Viators, that humanity managed to allegedly exterminate completely over 5 years ago. We open with our heroes stationed on the Argus, looking into the void of nothing – the Divide - where the universe stopped expanding. It’s a difficult concept to wrap your brain around and Dewes doesn’t want you to ‘get’ it, as most of the characters don’t even get it. They even mention the ship as a psych ward for some soldiers who think too hard about it. Fascinating stuff. We’re told that explorers sent to explore this nothingness thousands of years ago never came back. So the Night’s Watch with a little bit Expanse and Mass Effect sprinkled in. (Yes, Mass Effect. We’ve got the Genophage, a Kett/Collector type species, Relays, the Alliance, Biotics…I love it). The story doesn’t get deep into the who’s and why’s of the 200 Sentinels aboard the Argus, but you get the idea. The people assigned to the Argus aren’t given much of a choice it seems, and there’s no way off it. Like the Nights Watch, the Sentinels are criminals, convicts, and disgraced soldiers. They’re commanded by legit military Oculus who, like the Sentinels, are sent to the argus in an attempt to sweep them under the rug so civilization forget them. Politics. The Book has 2 POVs. The first is Cavalon, a disgraced prince of sorts who rebelled against his Grandfather’s eugenic experiments. He’s not a solder, but he’s smart, too smart for his own good too. A sarcastic asshole with quip for everything -I like him. The other POV is Adequin Rake, the ship’s Capitan and carries the title of Titan – a type of super solder. Tough, experienced, smart, and earnestly cares about the men and women on the Argus. A Decorated solider in the previous war, the reasons for her assignment is slowly peeled away through the book. So what’s so going? Why is this book such a page turner? That aforementioned void has started to recede. The force that expanded the universe is inexplicably bouncing back like a rubber band and no one knows why. The Argus isn’t build for speed, it can’t outrun the threat. There is no communication, no fuel, and the closest station that supports FTL speed sits empty. As someone obsessed with history and backstory, Ms Dewes has created a world with endless possibilities. There are so many stories she can write with the worldbuilding she’s created. We’re set in a universe thousands of years into our future, if not further. The Viators wiped out a dozen other Alien species, and nearly wiped out humans too – a fact mentioned just in passing. Humanity has expanded into a universal Empire. A war that lasted generations that killed billions. I want to soak all this up, but we are only given pieces of the whole. Teases to the world around the Argus. Which leads me to one of my nitpicky cons with the book. There wasn’t enough explanation for my liking. I wasn’t looking for a shopping list of facts, no one wants that. But a title or a word is used with little to no explanation. Or Something is said as if we’re supposed to understand – it made me feel like I skipped a page or was daydreaming through a chapter. I’d find myself flipping back to see if I missed something. This wasn’t often, and it may be my OCD like tendency to research information. For example, the great war with the Viators…how long ago was it exactly? A thousand years? I think. But they hid for some time and came back a decade ago? Is that right – yes, you find out a few chapters later. But also there’s a Savant on the Argus…a what? Some human genetic experiment the Viators kept as pets, I think – smart, calm, almost android like. There are also Drudgers who are Viator/Human hybrids. They were created to fight humanity as well. They are mentioned early on but we don’t actually learn about them until chapter 14ish. Just how did humanity turn into a military monarchy? Explain these military titles! How widespread are we? What happened to other Sentinel outposts! Tell me about the wars! The other species! First Contact! But this isn’t a history book, I have to remind myself. It’s a story set inside a already established world, and we’re learn about it as we go. I need to accept that. Book 2 is set for release in August, and I’ll be picking it up day 1. Unfortunately recent big name authors had made me fearful of starting a series, and I hope we don’t have to wait 10 years for book 3. It’s a risk I’m willing to take. No everyone can write as much as Sanderson. Oh, last complaint. People chew on their lips like it’s gum. Please stop. It freaks me out. How are you supposed to eat acidic foods after all that chewing?!

Enjoyed the book! I just couldn't give it a five because of the Hardy Boys approach to physics. That being said it was a great read.Great character development . Great characters. I just started the second book. Looking forward to it!

This was the first thing I've read by the author and I loved it. Very fun read. I also purchased the audio so I could progress the story while at work too lol. the narrators are phenomenal