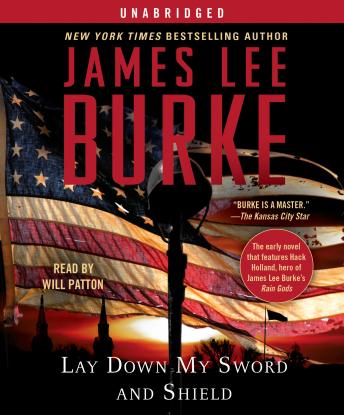 Lay Down My Sword and Shield

Vintage James Lee Burke: The first novel introducing the memorable Texas sheriff Hackberry Holland, coming of age against the backdrop of the civil rights era in a sultry border town.

In hot and sultry Texas, Hack, an attorney and Korean War POW, is being pushed by his wife, his brother, and his so-called friends in the oil business to run for political office. But Hack would prefer to drink, look after his beloved horses, and represent the occasional long-shot pro bono case at his law firm. When Hack attempts to overturn a conviction for an old army buddy, he finds himself embroiled in the seamy underbelly of the Texas patronage system—and in the earliest beginnings of the United Farm Workers movement, led by a beautiful woman who speaks to his heart in a way no one else has. As Hack begins to bring justice to the underserved, he finds both a new love and a new purpose.

With his skillful blend of engaging plotlines, compelling characters, and graceful prose, James Lee Burke demonstrates the shimmering clarity of vision that has made him beloved by suspense fans all over the globe.

Altho this is not my favored Robichaud book, Burke still is a commensurate poet here, just a tad darker. His main character at first seems like just a basic alchoholic who can't help himself. But he is still sensitive to the inequities in life and the story told is a great cross-section -- the landed gentry and its corruption, politicians and their corruption, what was the Korean War and its horrors and how they affected this one man. I also liked being reminded of lessons from contemporary history, focusing on the courage of farm workers and their attempts to organize. And boy, does James Lee get the alchoholic down pat! Altho I wouldn't read it again (TOO dark), I'd recommend it to anyone who wanted to study the way Burke characteristically describes the landscape. Awesome!

I am a fan of James Lee Burke's books, but "Lay Down my Sword and Shield" seemed to me, pointless and very depressing.

This title is due for release on February 16, 2010
We'll send you an email as soon as it is available!