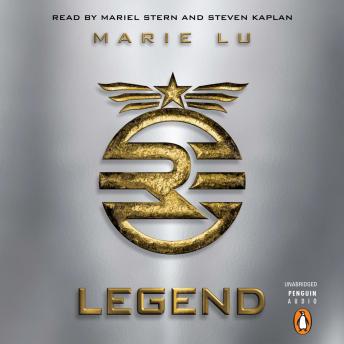 What was once the western United States is now home to the Republic, a nation perpetually at war with its neighbors. Born into an elite family in one of the Republic's wealthiest districts, fifteen-year-old June is a prodigy being groomed for success in the Republic's highest military circles. Born into the slums, fifteen-year-old Day is the country's most wanted criminal. But his motives may not be as malicious as they seem.

From very different worlds, June and Day have no reason to cross paths - until the day June's brother, Metias, is murdered and Day becomes the prime suspect. Caught in the ultimate game of cat and mouse, Day is in a race for his family's survival, while June seeks to avenge Metias's death. But in a shocking turn of events, the two uncover the truth of what has really brought them together, and the sinister lengths their country will go to keep its secrets.

Full of nonstop action, suspense, and romance, this novel is sure to move readers as much as it thrills.

I'm in love with these books! I knew I had to hear the audio version especially since I really want this to become a movie series. Hearing the voices for the characters just makes it that much more real to me!

Amazing! I've been addicted to Marie Lu's writing since reading the Legend series a few years ago (I especially love her WARCROSS series though so if you haven't read it yet, then definitely check it out). So when I saw this book available in audio format I was extatic, although I couldn't remember exactly what takes place only the general premise and the fact that I loved it. The male narrator does a sterling job, and it's lucky the story starts with his voice as the female narrator takes a lot of getting used to. Extremely girly in a stereotypical type of way, almost like she was straight from the 90210 show. Offputting! I was probably about 5 chapters in before I stopped wanting to pour bleach in my ears whenever June had something to say. I think June's character is so strong, steady and logical that the narrator's voice completely threw me off at first. I feel I have to mention it as it was extremely distracting from the actual story. ... BUT then I got used to it without even realising that I had, and as the story unfolded I actually began to look forward to chapters from June's perspective. The world building, storyline, character depth and writing style are incredible, and all work in sync to make this a fantastic read that you won't want to put down.

Good story and well written. Loved male narrator which was only voice I heard on trial. Once I purchased and started listening I heard the female narrator and it took acceptance to get used to. High pitched voice and not pleasant to the ear. She sounded like a Valley Girl.

Another great post apocalyptic novel. I fell in love with Day five minutes into this book and Marie Lu's character development is a notch above all her competitors .

Great book and my middle school students loved it.! Even the school appropriate love story!!! They want to read the whole series and these are students that reading is the last thing they want to do...

I'm excited for more!! It's my first time trying an audio book and i'm loving it.

Great book, but more action would be great. The story also has a very nice flow and interest the reader.

very good book great narration. one of the best, the next big trilogy in reading

This title is due for release on November 29, 2011
We'll send you an email as soon as it is available!