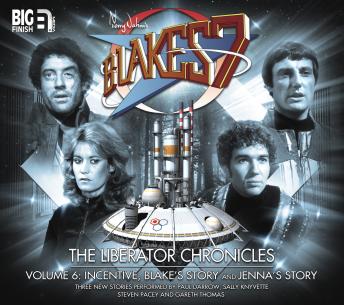 Three enhanced audiobooks performed by the stars of the classic BBC television series. These stories are set during Series 3.

The Liberator crew are recovering from a Galactic War and searching for their lost members Blake and Jenna. But it's a search that leads them into terrible danger...

Starring Sally Knyvette as Jenna and John Banks as Correl

Jenna's story is finally told - from her escape from the Liberator during the Galactia War, to her determination to continue the fight against the Federation alone... with the odds stacked against her.

Starring Gareth Thomas as Blake and Paul Darrow as Avon

Blake's story is finally told - from his escape from the Liberator during the Galactic War, to his new life as a troubled, scarred man on a distant rebel world...