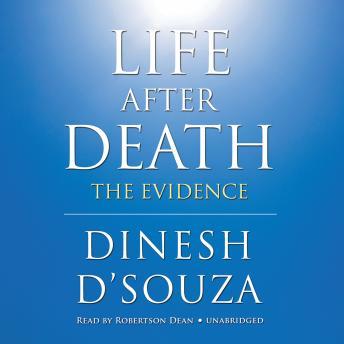 Life After Death: The Evidence

Is there life beyond the grave? Is it reasonable to believe in the afterlife? If so, how should we act on those beliefs? Bestselling author Dinesh D'Souza undertakes an unprecedented voyage of intellectual discovery to reveal the truth about life, death, and beyond.

Dinesh D'Souza, the bestselling author of What's So Great about Christianity, offers an illuminating discussion of the most universal belief in all religions: that of a life beyond this one. Unlike many books about the afterlife, Life after Death makes no appeal to religious faith, divine revelation, or sacred texts to make it's case. Drawing on some of the most powerful theories and trends in physics, evolutionary biology, science, philosophy, and psychology, D'Souza shows why the atheist critique of immortality is irrational-and draws the striking conclusion that it is reasonable to believe in life after death. He concludes by showing how a belief in life after death can give depth and significance to this life, a path to happiness, and reason for hope.

Life After Death: The Evidence

This title is due for release on November 2, 2009
We'll send you an email as soon as it is available!